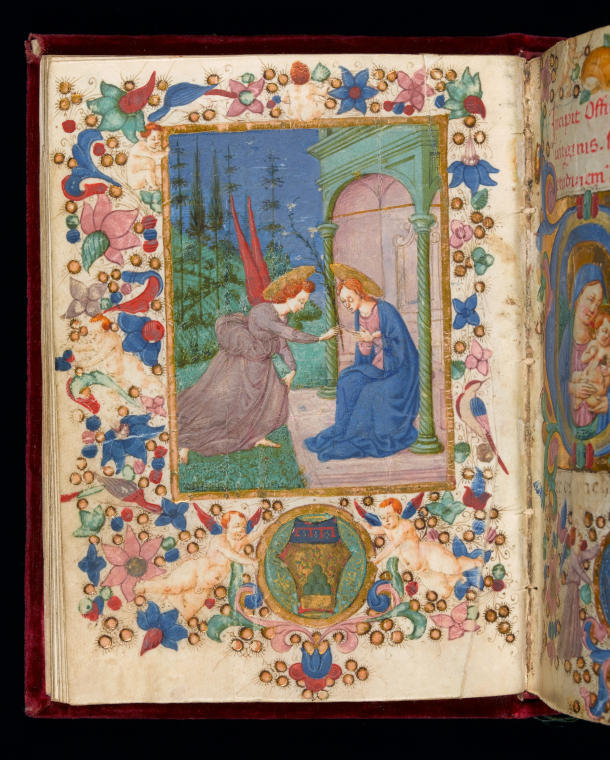 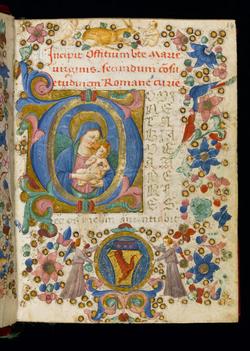 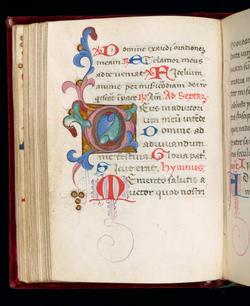 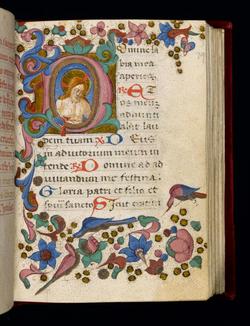 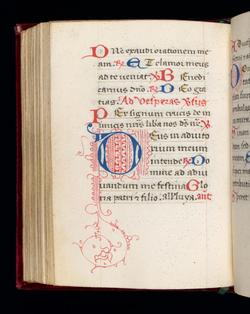 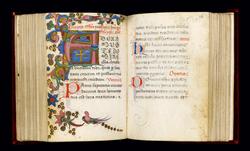 DECORATION: Full-page framed miniature with full floral border containing putti, birds, spraywrok with gold dots and a medallion with the arms of the Bari family (in chief a label of Anjou, gules of four and three fleur-de-lis or): fol. 13r Hours of the Virgin, Annunciation.

Four historiated initials in blue or pink with acanthus extensions on gold grounds and full or partial floral borders containing birds, putti and spraywrok with gold dots: fol. 14r Hours of the Virgin, Matins, [D, 9 ll.] Virgin and Child, with full border containing a deer, putti, birds and two angels supporting a medallion with the arms of the Del Caccia family (in chief a label of Anjou, or a lion’s gamp gules); fol. 79r Hours of the Passion, [D, 7 ll.] Bust of Christ as the man of Sorrows, with three-sided border; fol. 115v Short Hours of the Cross, [A, 6 ll.] Gold cross against blue sky, with three-sided border; Office of the Dead, [D, 7 ll.] Half-length skeleton holding a scroll inscribed MEMENTO MORTIS ET IN ETERNVM NPE.

History note: Probably made to celebrate a union between members of the Bari and Del Caccia (or del Cascia) families of Arezzo (arms on fols. 13v-14r); erased inscription in the lower border of fol. 1r; Ambroise Firmin-Didot (1790-1876); not identified in the catalogues of his library sold in Paris, Hôtel des commissaires-priseurs, 9 rue Drouot, between June 1878 and June 1884; John Henry Middleton (1846-1896), Director of the Fitzwilliam Museum (1889-1893); presented by his daughter, Mrs Reynolds, in July 1969, as if bequeathed by her father.