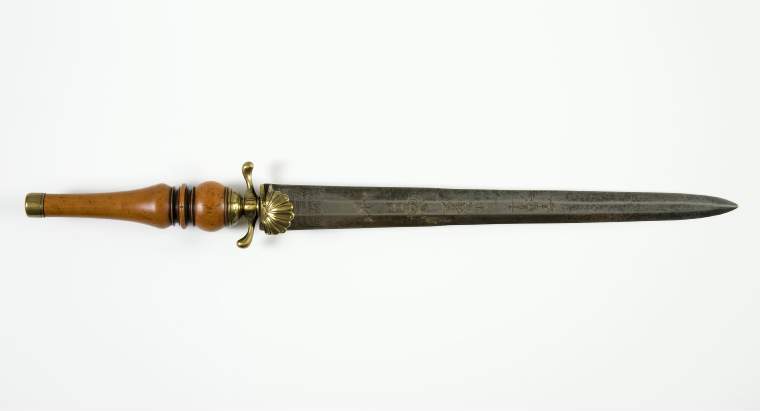 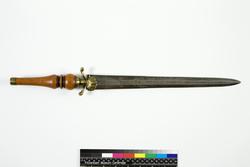 Plug-bayonet with boxwood grip of baluster form set in brass mouldings, short up-curving quillons and shell-shaped blade guard of brass, the steel blade etched and with gilt inlay.
Inscribed with the maker's name and address on one side in French and in Dutch on the other; as follows: Abm Du Cellier/md Fourbisseur/français dans/Le Kalverstraat/vis a vis/Le Cloître/à Amsterdam: Abm Du Cellier/mE Svaardviger/an der) Kalverstraat/set yas over/...Kloster/hat Amsterdam.

Given by A.J. Hugh Smith through the National Art Collections Fund

Early firearms were not always completely reliable and took time to reload. Bayonets were developed early on to convert a longarm, into a formidable weapon with which to fight the enemy hand to hand. This type of bayonet was pushed into the muzzle of a gun but later example were made that fitted to the side of the barrel so that it was possible to fire it as well as use the bayonet.