Warming Plate for the Mess of the 6th Regiment of Foot

White earthenware, moulded, transfer-printed underglaze in blue, and gilt. The lower part has deep curved sides and a sligthtly everted shape edge, and stands on a footring. On opposing sides it has an applied spout, the one on the left open to take the hot water, and the other covered by a moulded leaf. Both spouts are enclosed by cusped D-shaped handles. The plate-shaped top has a shaped and knurled rim, a concave border, and shallow well. The decoration of the top comprises a central bouquet of mixed flowers including roses and primulas, known as 'Blue Rose' surrounded by a 'Union' floral border incorporating roses, thistles, and shamrocks, enclosed by a shaped gold line. Each side of the exterior of the lower part is printed with an analogous large floral bouquet, and a smaller floral motif. The handles are covered with a lattice pattern embellished with gold lines, and the leaf cover on one side has a gold edge and central vein. The base is printed underglaze in blue with ‘H M 6.th Regt//Foot’.

History note: Margaret Hewat, Bassingbourn, from whom purchased on 19 October 1994 by the donor

Given by Mrs Margaret Cook

Spode’s Imperial mark was used between 1821 and 1833. Robert Copeland, described it as ‘The ivory coloured earthenware was an improved form of cream coloured earthenware: the glaze was clear so that the body yielded the true nature of its colour. Spode named this improved body Imperial. The mark is printed in blue and has been seen on examples of Blue Rose pattern and numbers 3248 and 4176, the latter (LEW 20) and (GG3656) exhibiting considerable translucency. . . . He notes that some Spode Imperial is white not ivory. He gives a recipe for the body which included China Clay 33.186%, Vitrescent Stone 33.186 %, Blue Clay 11.504 % and Dried Flint 22.124 %. The Blue Rose pattern and Union Wreath border pattern were introduced in 1825. The dish was made for the Mess of the 6th Regiment of Foot which in 1782 had become the 6th (1st Warwickshire) Regiment of foot, and in 1832 was named the Royal 1st Warwickshire Regiment. This plate was therefore made in or before 1832. In 1833 Spode factory became Copeland & Garrett. 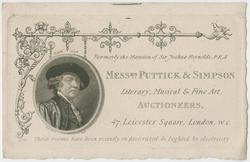 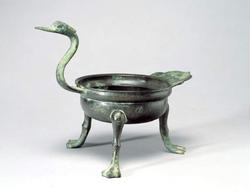 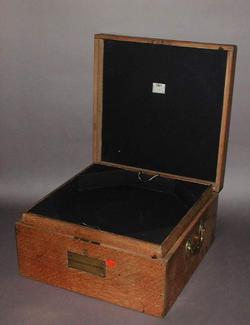 Case for Portuguese ewer and basin 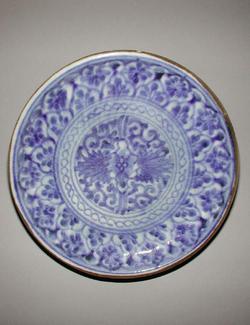