Clear metal, blown, cut, painted in yellowish-green, yellow, red and brown enamels, and gold. The bowl is circular with a small, slightly concave ground base, and curved sides which contract very slightly at the rim. The sides are divided into three zones by two sets of three cut horizontal bands. The lower part is occupied by vertical cuts radiating from the base. the second zone has on the front a rectangular panel painted with a nereid and a triton, water and weeds, flanked by three vertical cuts. The rest of that zone is diamond cut. The upper zone is decorated with red enamel laurel outlines over a broad gold band which extends over the rim and down inside the bowl for 2 cm.

History note: Unknown before lent by donor in 1981

Given by C.P. Stockbridge

This bowl is attributed to William Collins of 227 the Strand, London, on the basis of its similarity to a garniture of vases formerly in the collection of the Augustus Frederick, Duke of Sussex (1773-1843). On a trade card of 1815 bearing the arms of Queen Charlotte and the Duke of Sussex, Collins described himself as 'Glass manufacturer to Her Majesty and the Royal Family. He sells an extensive variety of lustres, Grecian lamps and cut glass of every description, flint, plate and window glass for exportation.'. .'. In 1822 he described himself as ‘Glass Manufacturer to His Majesty and their royal Highnesses the Duke of Sussex and Princess Elizabeth’. 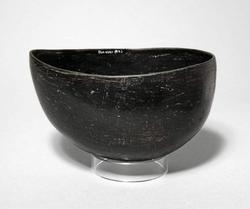 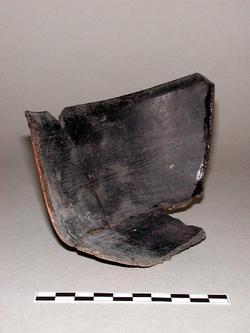 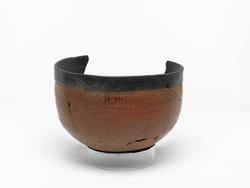 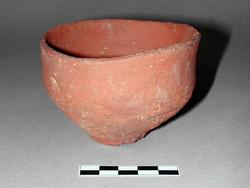