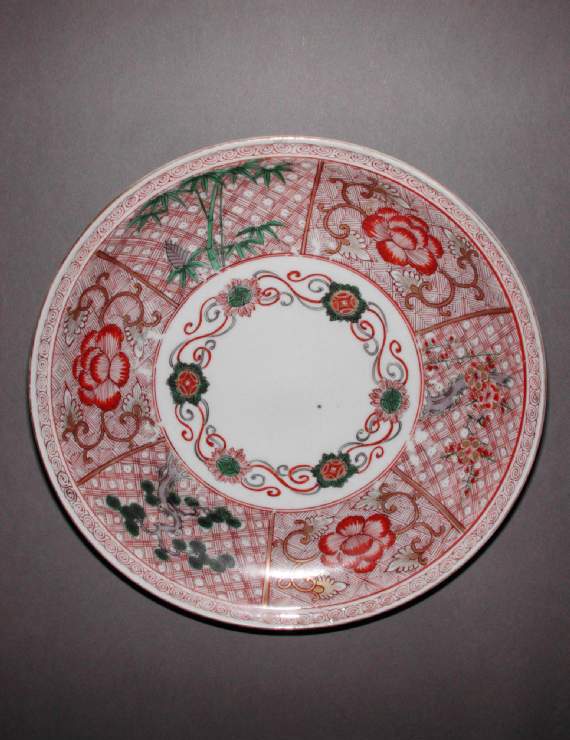 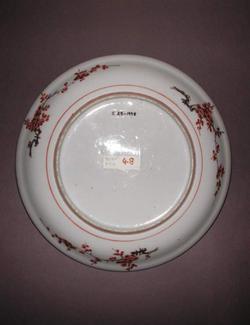 Plate. Hard-paste, greyish, porcelain, painted overglaze in red, green, aubergine and black enamels, and gold. Circular, with shallow rounded sides and narrow sloping rim, resting on a low tapering footring, with flat, glazed base. There is irregular glazing round the footring. The white central medallion is painted with scrolling stylised flower heads; the cavetto with six panels: three of peony/camellia plus Han "flowers" and leafless scrolling on concentric lozenge brocade alternating with three panels respectively of prunus, pine and bamboo on red trellis brocade. On the flat rim there is a red scrolling border and a gold band on the edge. Round the back are three sprays of prunus above one red line, and two red lines encircle the foot. Four spur marks on the base. There is a central bump on the base.

History note: Helen Buxton, from whom two were purchased by the donor

Given by Miss Irene Finch

According to the donor "Han flowers" are similar to those used on Han silver. The central flowers have a coin surrounded by peony leaflets, peony leaflets suggest mid century. Nabeshima used these "flowers" circa 19th Century, with leafless scrolling. Dating is difficult, possibly 17th Century, possibly a late revival (in later periods earlier revivals were made).