Alabaster carved in high relief with traces of the original colour and gilding. The Virgin is seated on a backless throne in the centre, strictly frontalised, with her hands outspread. Her draperies are arranged in highly conventional symmetry. On either side at her feet is a gilded feathered angel with four wings showing spines on the inner surface. The angel on the left plays a lute, whilst the one opposite probably played a harp (see documentation). Above the angels, seated on backless thrones, are two persons of the Trinity, crowned and bearded, facing inwards and placing a triple crown on the head of the Virgin. Above the Virgin's crown appears out of the clouds the third person of the Trinity, half-length, crowned and bearded, frontalised and with hands outspread. Between the heads of the Three persons of the Trinity appear two half-length angels rising out of the clouds, with hands outspread and wings coloured as those below. The background is crowded with little gilded knobs and there are many traces of the original colour, especially the gilt borders to the edges of the robes, the tinted lips, the large fiery halo behind the Virgin's head, the red mantle of the figure on the left and the blue mantle of the figure on the right. [Description taken from Philip Nelson, 1920].

Method of acquisition: Given (1923) by The Friends of the Fitzwilliam Museum

Carving : Alabaster, carved in high relief, with traces of the original colour and gilding 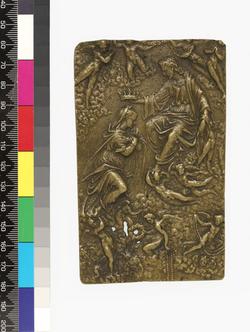 Coronation of the Virgin 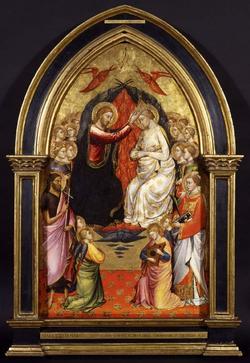 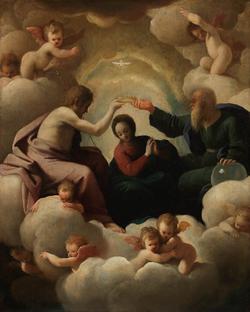 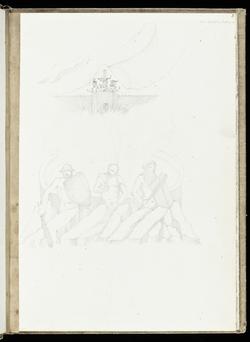 Two studies: above, three figures with snakes coiled around their heads and necks, standing on top of a battlement which is surrounded by fire, mountainous background; below, three naked warriors standing before a large well and behind craggy rocks, the figures at left and right are holding large clubs and shields, and the one in the centre holds a broad knife