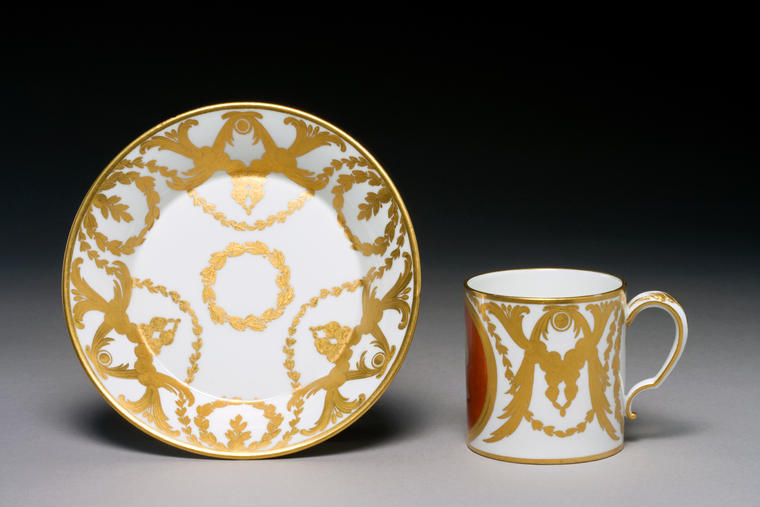 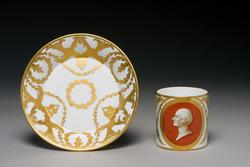 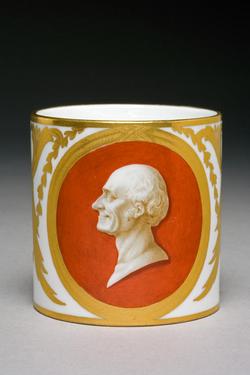 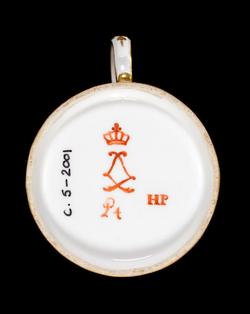 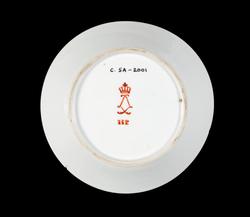 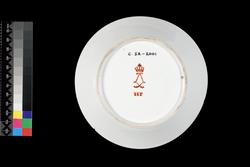 Hard-paste porcelain cup and saucer, painted with the head of François-Marie Arouet, called Voltaire (1694-1778) in profile to left on the cup in brown and red enamel, and gilded.

Hard-paste porcelain painted in shades of brown and tomato-red enamel, and gilt. The cylindrical cup has a scroll handle with leaf moulding on top. The circular saucer has deep sloping sides and a flat centre. The front of the cup is decorated with a tooled gold oval frame enclosing a head of François-Marie Arouet, called Voltaire (1694-1778) in profile to left painted en grisaille in brown against a tomato-red ground. The frame is tooled with two zig-zag lines with cross binding at the cardinal points. The two sides are decorated with swags of small leaves, over which are pairs of cornucopia-like formal flowers pointing upwards, interlaced with pairs of palms pointing downwards, and round the handle is a wreath of larger leaves and berries. There are gilt bands round the lower edge and rim, and down the sides of the handle, which also has a formal leaf on its top. The inside of the saucer is decorated en suite with the sides of the cup, and has in addition a circle of leaves and berries in the centre.

Purchased with the Rylands Fund

The gobelet litron was named after a cubic measure, the litron, which was normally made of wood, and was used for dry stuffs, such as corn and peas. Its size in Paris had been defined in 1670 as the equivalent of 9.45 cm high and 10.15 cm in diameter in pouces and lignes, which was larger than the largest of the porcelain cups. The first size of gobelet litron had been introduced at Vincennes before October 1752 when it was mentioned in an inventory of stock, but was probably being made a few years.The second and third sizes followed in 1753, and the fourth and fifth in 1757. They could be fitted with one of seven different handle forms . A drawing in the archives at Sèvres is dated 19 February 1753 (MNS, R1, liasse 2, dossier 2, No. 6bis) They were supplied singly, singly with a plateau carré, in ’harlequin’ sets, or as part of matching dejeuner. (See Documentation, Préaux 1991, Bellaigue 2009, Savill, 1988)

The painter's mark is that identified as for Pierre-Nicolas Pithou aîné who was the older brother of Nicolas-Pierre Pithou jeune (1750-1818), both of whom were unusual among Sèvres painters in undertaking portraits, and were among the first to work on hard-paste. Pierre-Nicolas Pithou, was employed at the factory from 1757 until his retirement in April 1790 and Nicholas-Pierre from 1759/6-7, 1769-95 and 1814-18. However, in the records of payments to painters for 1777-80 (Vj 1, fol. 231) on 18 July 1777, two gobelet litron 2 (second size) with ‘Teste de Voltaire’ are listed under Pithou jeune’s work for 1777 but without the amount paid being cited.

The profile was probably based on the bust of Voltaire for which models were produced by the Sèvres factory in 1767. This is traditionally attributed to Jean-Claude-François Rosset (1793/6-86), but without documentary evidence. An example is in the British Museum (1988,7-1,2).

Inscription present: script N with an upward curve before the first upward stroke