Figure of a Poet, perhaps Dryden

Soft-paste porcelain figure of a Poet, perhaps Dryden, of a greysh-white colour, with a little gilding left.

Soft-paste porcelain figure of a Poet, perhaps Dryden,, of slightly greyish-white colour, moulded, and lead-glazed, with remnants of gilding. The glaze around the lower edges and the lower part of the pedestal is very thin. The unglazed underside is closed, and uneven. On the right of the thick, shaped base is a rectangular moulded pedestal with three masks linked by swags in relief below the top, on which is a pile of four books, with a little gilding on the spines. The poet stands on his right leg with the left relaxed at the knee, leaning on his left elbow on the pile of books, and supporting his head on his left hand. In his right hand he holds an unrolled scroll. He has short straight hair, and wears a shirt, jacket, breeches, and shoes with ribbons on top. He has his right arm through the sleeve of a long gown, which is drawn across his body and falls down to the ground at the back.

Purchased from Dr and Mrs H. Statham Collection with the Cunliffe Fund and grant-in-aid from the Victoria and Albert Museum

A prototype has not been identified, but the format is comparable to that of Scheemaker's monument to Shakespeare in Westminster Abbey, or John Cheere's bronzed plaster of Milton belonging to York City Art Gallery.

This model was formerly attributed to Longton Hall ans was O82 in Bradshaw's list of late Longton Hall figures. He dated these between October 1757 when the Rev. Robert Charlesworth (1717-71) became a shareholder, and September 1760 when he sold off the factory's stock in Salisbury, having advertised the dissolution of the partnership on 9 June of that year.See Documentation., Bradshaw, 1981. It has since been suggested that the figure is more likely to have been made at the Vauxhall Porcelain factory, see Documentation, Massey, 2014. 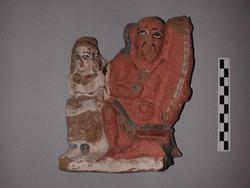 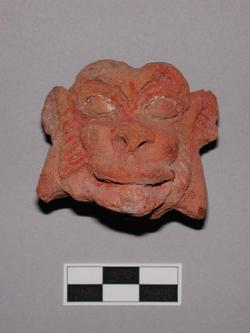 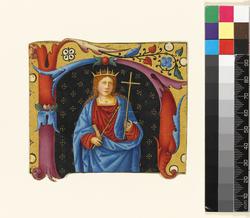 Historiated initial from a Choir Book