Neptune with a Dolphin representing Water from a Set of Elements: C.55-1932

Neptune with a Dolphin representing Water from a Set of Elements

Soft-paste porcelain containing bone ash, figure of Neptune with a Dolphin, press-moulded with hand modelled details, painted over lead-glaze in greyish-blue, pale greyish-green, pale turquoise-green, pale yellow, flesh-pink, pink, dark pink, red, purplish-grey, and black enamels, and gilt. The glazed underside has a central, circular ventilation hole. The high square base has five scrolled feet and a pierced semi-circular rocaille motif between the two at the front. The upper part of the front above this is pierced by three circular holes. Neptune stands on his left leg with his right knee bent and his right foot resting on a dolphin behind him, whose open mouth spewing water projects on his left. He holds a vase filled with water under his left arm and with his right hand holds up his drapery in front of him. He has a circlet of green seaweed over his long, purplish-grey hair, and a long purplish-grey beard.. His drapery is decorated with a pattern of gold daisies in shaded pink circles, inter-spersed with red and gold foliage, and has a turquoise, pink, and pale yellow striped lining, and a gold edging. The vase is purplish grey with two gold bands. The dolphin has a pink, grey, and red head with black eyes, and a greyish-green body with grey scales, and red fins and tail. The top of the base is decorated with applied leaves and four groups of flowers: pink, blue, pink, and red. The scrolls on the base are picked out in gold.

This figure was probably derived from the statue of Water by Pierre Le Gros (1629-1714) at the Fontaine du Point du jour or Cabinet des combats d'Animaux in the garden at Versailles. The pose of the figure also conforms to a reduced-size bronze of which there is an example in the Grünes Gewolbe, Dresden, which has also been transformed into a bearded Neptune. 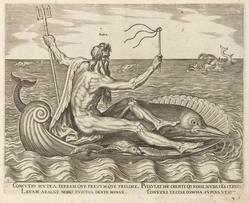 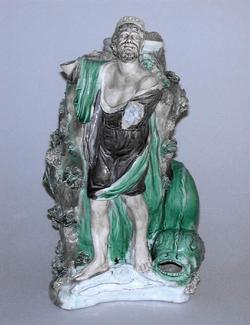 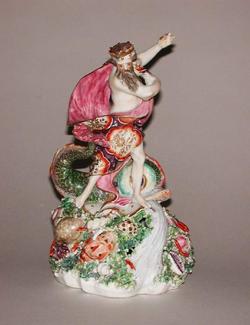 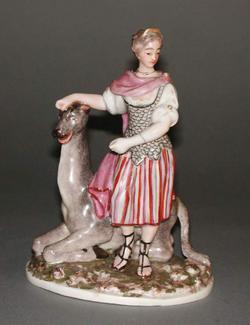 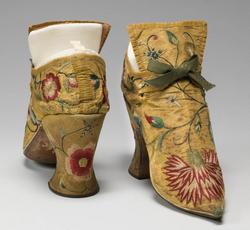