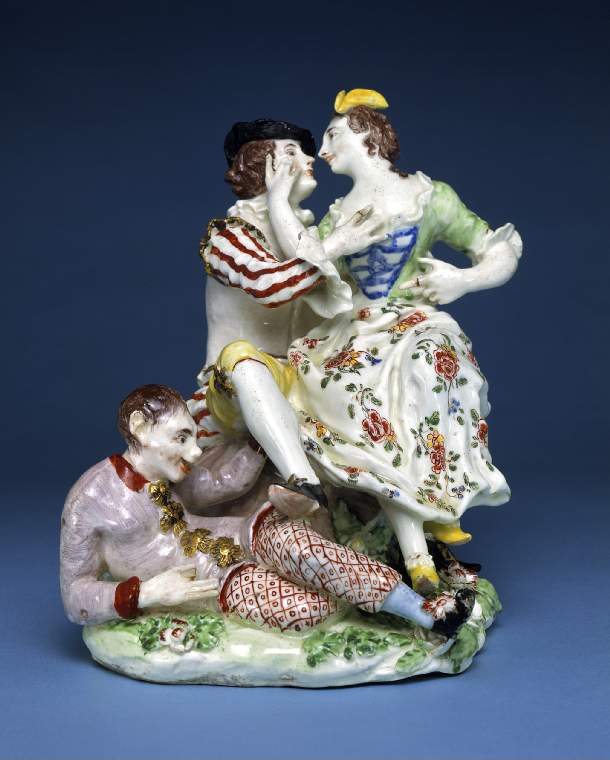 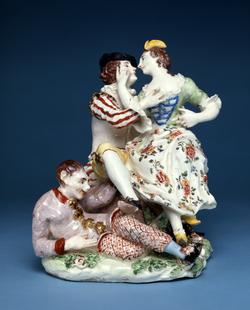 Soft-paste porcelain containing bone ash (presumed), press-moulded, and painted over lead-glaze in blue, green, yellow, a little flesh-pink, red, pale greyish-brown, pale brown, dark brown, and black enamels, and gilt. The three-sided base is closed underneath and has a concave area at the front, and a large circular ventilation hole further back. The interior of the group and the central area of the base are glazed. Beltrame sits on a large green and brown mound with Columbine seated on his left knee. His right foot rests on Harlequin who reclines on the ground in front of them, lasciviously lifting Columbine's skirt a little with his left hand and peering beneath it.
Beltrame wears a black hat, a white shirt with a ruff; a white jacket with red and white striped sleeves, and gold trimming round the armholes and waist; breeches with red and white stripes at the top and yellow fabric at the bottom and a gold rosette at the knee; and black shoes with gold bows. Columbine wears a small yellow tricorn hat, a green bodice with blue lacing over a white stomacher, a flowered skirt, and yellow high-heeled shoes with white bows. Harle-quin has a long-sleeved, pale greyish-brown jacket with red collar and cuffs, and four gold flower-shaped buttons down the front; breeches with a red trellis diaper pattern; blue stockings, and black shoes with a red rosette on top.
The top of the base is green with applied green leaves, and flowers: a white, a yellow, a blue and three red and white.

From about 1750 Meissen figures were to be seen in London; and during the next few years porcelain table decorations became a feature of desserts at fashionable entertainments. The copis and adaptations wee mainly of single figures or pairs. Groups were attempted infrequently, probably because fewer seem to have been imported, and because they posed greater technical problems for inexperienced English modellers. The 'Indiscreet Harlequin' was based on a Meissen group (model number 344) modelled by J.J. Kaendler, about 1742, but not mentioned in his Taxa or work notes. Like many of his groups, it displays a sly sense of humour, rarely found in English groups. The Bow group differs from the Meissen model in minor details, such as the shape of the lover's hat. The pose of Columbine may have been inspired by an engraving of Columbine and Harlequin from Les Amours de Columbine by Petrus Schenck after drawings by Gérard-Joseph Xavery, and Harlequin's pose by that in Harlequin and the Blind Beggar, plate 32 of Gregorio Lambranzi, New and Eccentric School of Theatrical Dancing, 1716. See Documention, Chilton, 2001.

Inscription present: circular printed in black 'ENGLISH.CERAMIC.CIRCLE 1948' surrounding 'No.' and in black ink '166' 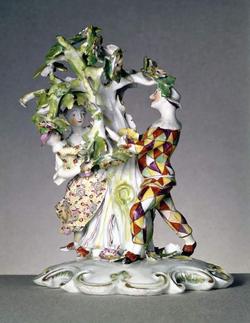 Harlequin, Columbine and Child under a Tree, also known as Harlequin's Family 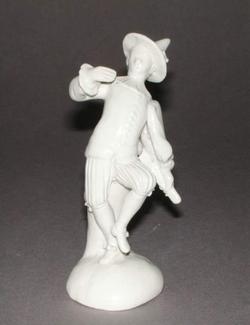 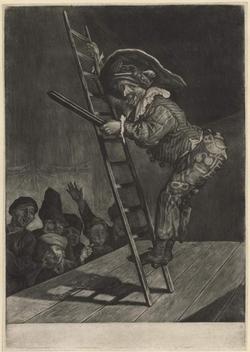 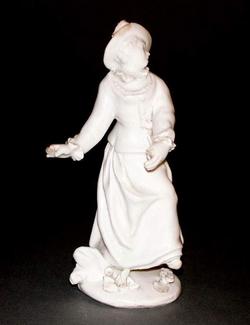 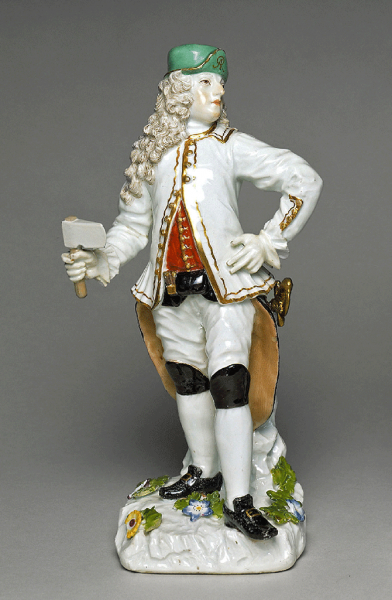 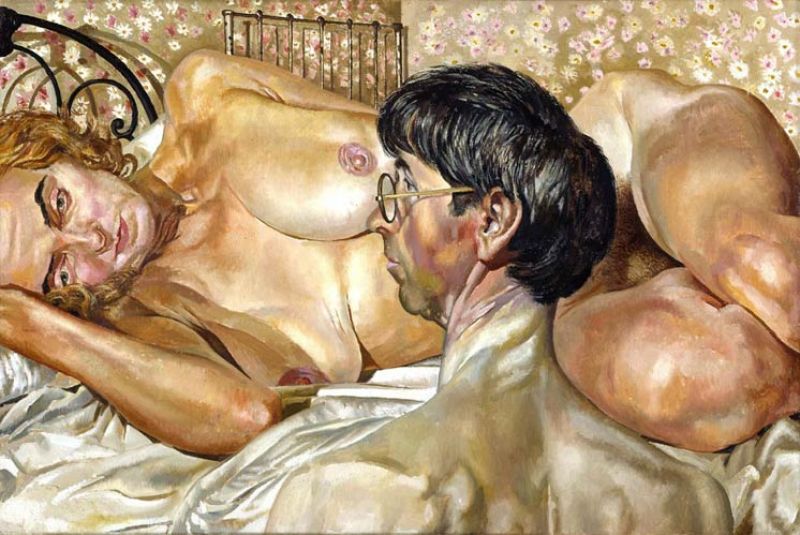