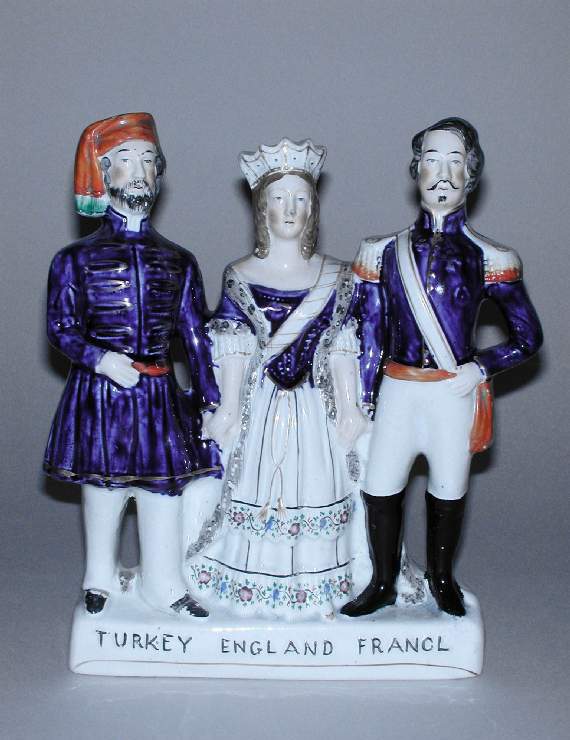 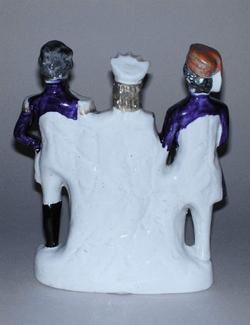 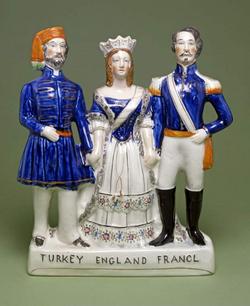 Three well-coloured figures stand side by side, clasping hands, on a base inscribed 'TURKEY ENGLAND FRANCL' (sic). On the left, the Sultan wears a blue tunic, an orange turban and belt, white trousers and black shoes. In the middle, Victoria wears a gilded crown and a gown with blue bodice, ermine cape and a full white skirt, the latter edged with two rows of finely painted floral decoration in green, blue, red and dark pink. On the right, Napoleon III is bare-headed; he wears a short blue military jacket with white sash and epaulets, an orange belt; white breeches; and shiny black boots. All the clothing is richly decorated with gilt. The men have black hair, moustaches and beards. Victoria has long brown hair and youthful features. The base is rectangular, extending to an oval at the back; the inscription is in raised gilded capitals above a gilt line which dips down at the ends. The underside is concave and glazed, with a central vent hole. The back is decorated only above the shoulders, the remainder flat and marked with a criss-cross pattern of indentations in the clay.

The Crimean War (1854-56), in which France, England and Turkey formed an alliance against the Russian Empire, was a popular source for Staffordshire figures. In this group, Sultan Abd-ul-Medjid (Turkey), Queen Victoria (England) and Emperor Napoleon III (France) stand shoulder to shoulder, clasping hands.

The source for this group is an engraving in the Illustrated London News of 9 September, 1854, which shows a medal commemorating the alliance, by A Caqué. The obverse shows an illustration of the three figures, in similar pose, with the words ‘TURKEY-ENGLAND-FRANCE-CIVILIZATION GOD DEFENDS THE RIGHT’. The reverse reads: ‘IN THE YEAR 1854 DURING THE REIGN OF QUEEN VICTORIA AND THAT OF NAPOLEON III GREAT BRITAIN AND FRANCE JOINED TOGETHER IN ORDER TO INSURE THE PEACE OF THE WORLD’.

This was one of the first Victorian Staffordshire figures bought by Dr Glaisher. In 1905, he recorded it in his notebook thus: ‘Bought as a historical relic of the Crimean War. This also fixes the date as about 1854 and shows the sort of manufacture and colouring in vogue at that time – this being a good specimen, i.e., better than usual, of the cottage ornaments of that time’.

Woolliscroft (1976) attributes the group to Sampson Smith, at Longton, a factory listed in contemporary directories as a ‘manufacturer of figures in great variety’, which began around 1851 and continued to make figures in quantity into the early part of the twentieth century. Sampson Smith figures are typically a simple three-part moulding, like this, and often have the title in raised capitals, though they usually have a plain oval base. So this figure group may have been made there, though there does not seem to be sufficient evidence to confirm the attribution. This concurs with Rackham’s listing (1935) of the group as of a type made chiefly by Sampson Smith.

Press-moulding : White earthenware moulded in three parts and pearlware glazed. Painted underglaze in cobalt blue and black and with black, grey, brown, red, orange, blue, green, pink and flesh-pink enamels, and gilt. The underside is concave and glazed, with a central vent hole. The back is decorated only above the shoulders, the remainder flat and marked with a criss-cross pattern of indentations in the clay.
Painting Lead-glazing Gilding

Inscription present: inscribed across the front, in raised gilded capitals, above a gilt line 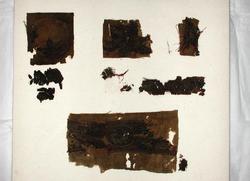 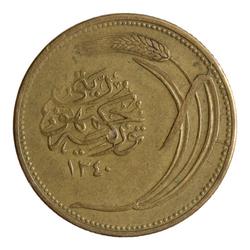 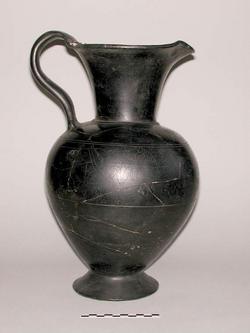