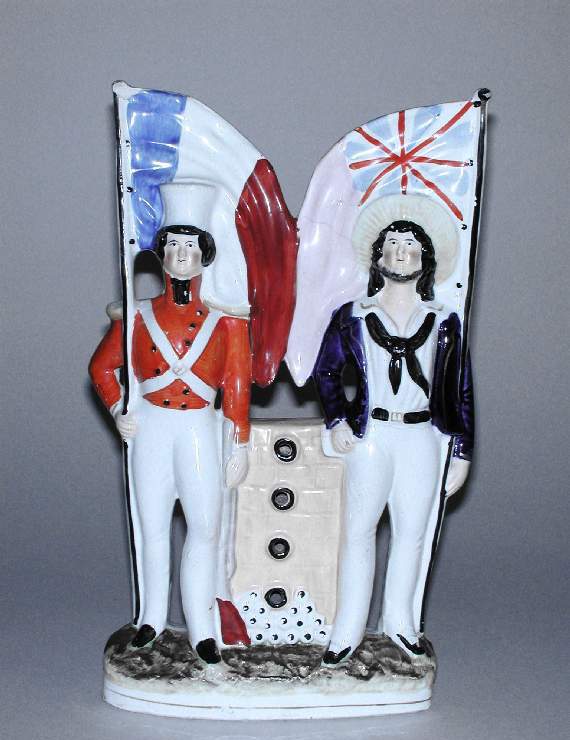 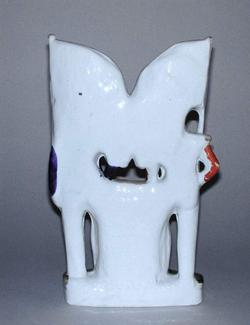 The French soldier, on the left, holds a tricolour flag in his right hand and a gun in his left, its butt resting on the ground. He wears: a cap with black peak: an orange jacket with two rows of black buttons, yellow epaulets, gilt edged cuffs and a black neckerchief; and crossed white belts with a gold buckle. The gun has a grey barrel and a brown butt. Beside him, the sailor holds a Union Jack flag, with pink extension. He wears: a gilt edged, open, blue jacket; a white shirt with gilt edged collar; a loosely tied black neckerchief; a black belt with gold buckle; and a wide brimmed yellow hat. The sailor has a beard; both wear black shoes. Between them is a flesh-pink wall, with four black-lined cannon mouths; at its base is a pile of shot, touched in black. The rectangular base is rounded to one end; a gilt line runs across its front. The group is well coloured. The figures stand on rough ground, which is painted in a combed pattern of brown and green. The underside is concave and glazed. The back is flat, with a vent hole 27cm from the bottom. There are four round holes in the centre front, 6,9,11.5 and 14cm from the bottom.

This figure group dates from the Crimean War (1854-56), when France, England and Turkey formed an alliance against the Russian Empire – a popular source for Staffordshire figures. The Fitzwilliam collection also includes a similarly posed figure group of the French Emperor, Napoleon III, and Queen Victoria’s consort, Prince Albert (C.1026-1928). The existence of both these groups in different mouldings, including the French soldier and the English sailor as single figures, indicates that they sold well.

Woolliscroft (1976) lists this figure as attributed to Sampson Smith, at Longton, a factory listed in contemporary directories as a ‘manufacturer of figures in great variety’, which began around 1851 and continued to make figures in quantity into the early part of the twentieth century. Rackham (1935) also identifies the group as of a type made chiefly by Sampson Smith. The simple three part moulding of this figure and its plain oval base suggest it might have been made at the Sampson Smith factory, though there seems to be no other evidence for this attribution, and there were many other, manufacturers of figures working in Staffordshire at this time.

Press-moulding : White earthenware moulded in three parts and pearlware glazed. Painted underglaze in cobalt blue and with black, grey, brown, red, orange, green, yellow, pink and flesh-pink enamels, and gilt. The underside is concave and glazed. The back is flat, with a vent hole 27cm from the bottom. There are four round holes in the centre front, 6,9,11.5 and 14cm from the bottom.
Lead-glazing 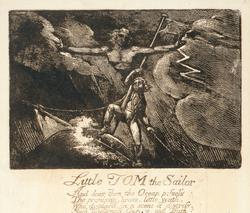 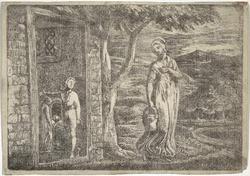 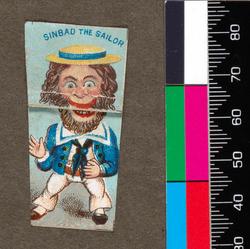 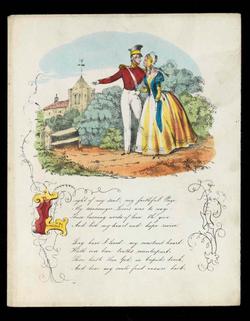