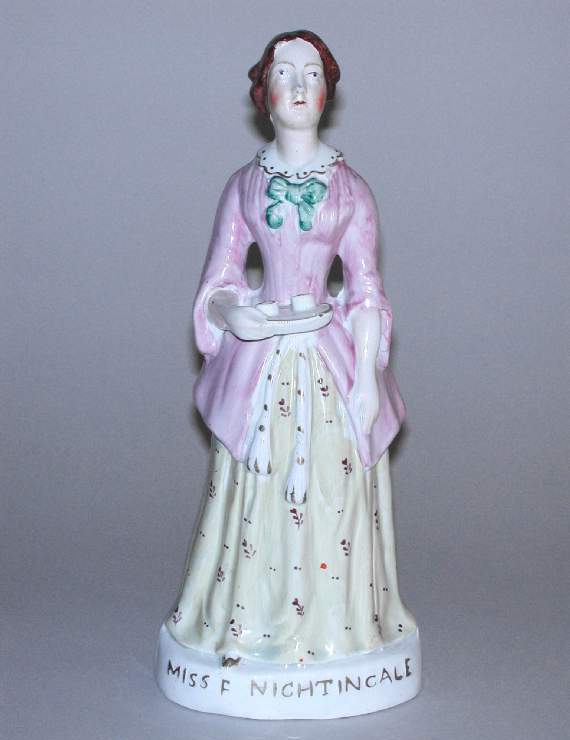 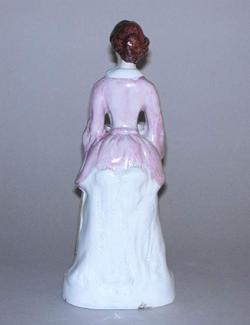 The oval base is lettered ‘MISS F NIGHTINGALE’ in raised and gilded capitals. Florence Nightingale stands gazing upwards; she holds a tray bearing two cups in her right hand. The figure is well coloured. She wears a long, pink, waisted bodice, a gilt edged collar with a large green bow, a full yellow skirt decorated with dark pink sprigs, and a tasselled girdle which is edged in gilt; a gold slipper shows beneath her hem. She has blue eyes and her hair is brown, tied back in a bun. The tray and cups are gilt edged. The underside is concave and glazed, with a small vent hole towards the centre back. Only the upper half of the back is fully moulded, the lower part being roughly shaped to suggest the folds of a skirt.

Florence Nightingale (1820-1910) was a hospital reformer who has come to be seen as the founder of modern nursing. In 1854, she sailed with 38 nurses to the Crimean War. Her evidence on the parlous sanitary conditions there influenced the establishment of the first army medical college. The Nightingale School and Home for Nurses, the first secular nursing school in the world, was established in 1860.

Nightingale’s public profile was well established by the mid 1850s, when this figure was made. While she was in the Crimea, public meetings were held to recognise her work and raise funds for the training of nurses. She gained the nickname ‘the Lady with the Lamp’, and was the subject of many popular broadsides, poems and paintings.

Rackham (1935) lists this figure as of a type made chiefly by Sampson Smith at Longton. Sampson Smith is listed in contemporary directories as a ‘manufacturer of figures in great variety’ and seems to have begun making figures around 1851. But there were many other, often smaller, manufacturers of figures working in Staffordshire at this time. This figure shares certain features commonly attributed to Sampson Smith, including the plain oval base with title in raised gilt capitals, but the decorated back, the somewhat wispy figure and the addition of a separately moulded tray and cups suggest it is more likely to have come from another factory. Balston (1958) and Wolliscroft (1976) identify another figure of Florence Nightingale, similar to this but wearing a veil and without the subsidiary moulding, which might more convincingly be attributed to the Sampson Smith factory.

Press moulding : White earthenware moulded in three parts, with separately modelled right hand carrying a tray, and pearlware glazed. Painted with brown, blue, green, pink, yellow and flesh-pink enamels, and gilt. The underside is concave and glazed, with a small vent hole towards the centre back. Only the upper half of the back is fully moulded, the lower part being roughly shaped to suggest the folds of a skirt.
Painting Lead-glazing Gilding 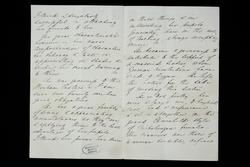 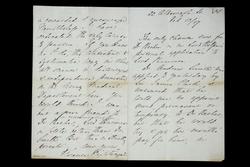 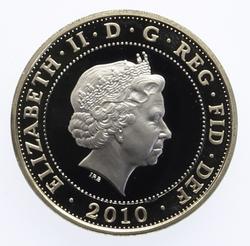 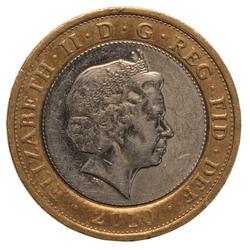 Nine tiles, each depicting a Biblical scene connected to food

A lady holding a plate with a waffle

A bundle of asparagus

A kitchen interior with a maid filleting fish at a table