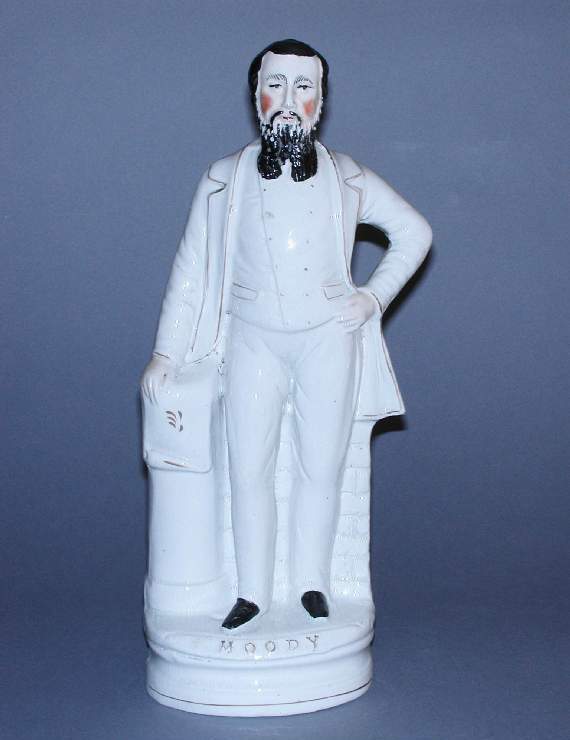 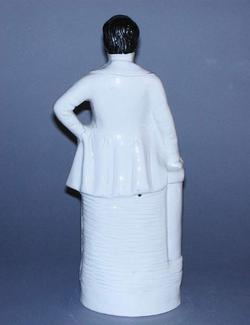 The oval to round base is waisted to the front, and lettered MOODY' in relief gilt capitals at the top; a gilt line runs across, close to the bottom. Dwight Lyman Moody stands against a low wall with his left hand on his hip and his right resting on a cloth atop a short pillar. The figure is mainly white, with features picked out in enamels and gilt. Moody wears a long coat, its lapels and cuffs lined in gilt, and a double-breasted waistcoat with buttons and pockets highlighted in gilt. He has black hair, a moustache and a full beard, which parts into two on his chest, and his eyebrows are finely painted. His shoes are black. The pillar cloth is decorated with touches of gilt. The underside is concave and glazed. The upper back is moulded, with a vent hole 14.25 cm from the bottom; the lower back is partly moulded and combed.

Dwight Lyman Moody (1837 - 1899) was an American evangelist and publisher who founded the Chicago Adventure Church, two schools in Massachusetts and the Moody Bible Institute. In 1870, Moody met Ira D Sankey, the Gospel singer, and together they held crowded revival meetings throughout the United States.. In 1873 he and Sankey came to Britain for a two year revival tour that culminated with a four month London Crusade in 1875. It is said that a crowd of 20,000 attended their Edinburgh meeting, held on the slopes of ‘Arthur's Seat’, and they raised £10,000 for the building of a Mission in the Royal Mile. This figure was probably made at the time of the 1873-75 visit.

However, the moulding of the Fitzwilliam figure differs from that of the 17 inch Sampson Smith model in several significant respects: Moody’s waistcoat is double, not single, breasted; his beard divides into two; his right hand rests on a cloth not a book; and the front of the base is different. It is known that figures of Moody and Sankey were also made by other factories – a pair is listed, for example, in an early twentieth century catalogue produced by the Kent factory, successors to Thomas and John Parr – and there were many other, often smaller, manufacturers of figures working in Staffordshire at this time. It seems likely that one of these others made this figure.

Rackham (1935) lists this figure as probably made by Sampson Smith at Sutherland Works, Longton. Sampson Smith is listed in contemporary directories as a ‘manufacturer of figures in great variety’ in Longton and seems to have begun making figures around 1851. The firm continued to make figures in quantity into the early part of the twentieth century. Sampson Smith figures are rarely marked, but in 1948 a number of original moulds were found on site, and one of these was a mould for a 17 inch figure of Moody, in similar pose to this one.

The Fitzwilliam collection also includes a smaller, 9 ¾ inch, Staffordshire figure of Moody, in similar pose, and a companion figure of Sankey. The moulding of these figures suggests that they may have been made by Samson Smith.

Press moulding : White earthenware moulded in three parts, with separately moulded right leg, and covered with blue-tinted lead-glaze. . Painted with black, red and flesh-pink enamels, and gilt. The underside is concave and glazed. The upper back is moulded, with a vent hole 14.25 cm from the bottom; the lower back is partly moulded and combed.
Painting Lead-glazing Gilding 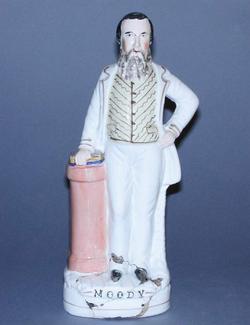 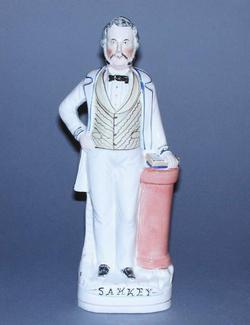 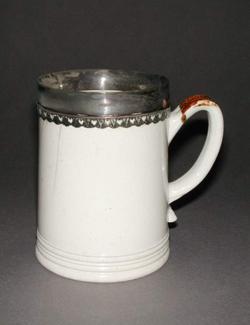 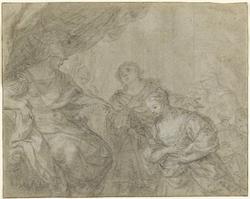 The Continence of Scipio