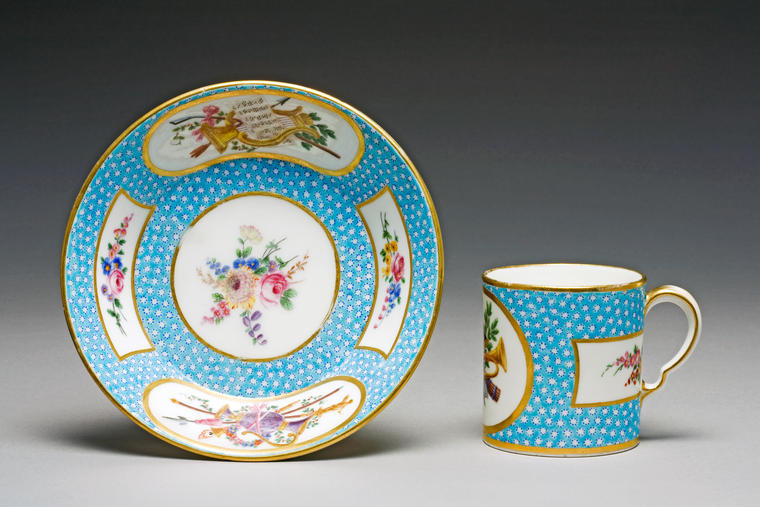 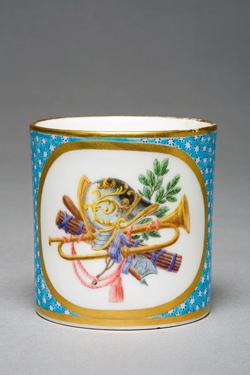 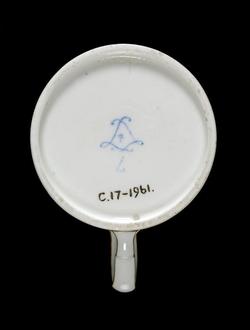 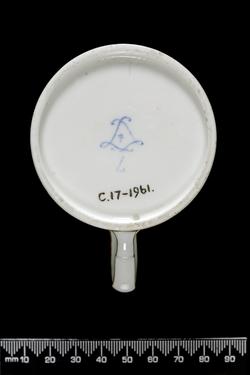 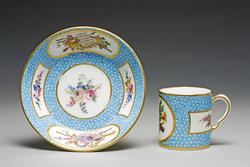 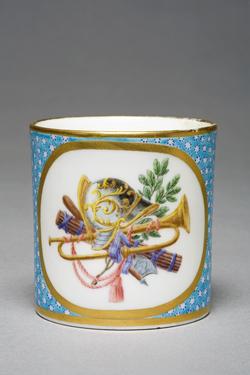 Soft-paste porcelain cup and saucer, with a turquoise and mid-blue pointillé ground, painted in enamels, and gilded, with military and musical trophies, and floral sprays in reserves.

Soft-paste porcelain decorated with a pale turquoise and mid-blue pointillé ground, painting in blue, green, yellow, pink, pale purple, brown, grey and dark grey enamels, and gilding. Cylindrical cup with ear-shaped handle. Circular saucer with flat central area and sloping sides. Both pieces have a suspension hole in the footring. Both pieces have a pale turquoise ground with regularly spaced white circles surrounded by blue dots. On the front of the cup there is acircular reserve framed by a gold band tooled with trellis, and painted in polychrome with a military trophy comprising a cornet bound by a pink cord with a tassel, a helmet, fasces, an axe, and spray of laurel (?). On the opposite side, running under the handle is a long, gold-edged rectangular reserve painted with polychrome flowers and foliage. There are bands of gilding round the foot and rim and and lines of gilding down the sides of the handle. The saucer has a circular central reserve, framed by a gold band and painted in polychrome with a posy of flowers. On the sides there are two long rectangular panels, framed by gold bands and painted in polychrome with floral sprays, alternating with two elongated oval panels, framed by gold bands faintly tooled with trellis. One contains a musical trophy comprising a lyre, a sheet of music, an arrow, and a houlette tied with a pink bow, and foliage; the other, a ewer, flaming torch, halberd, staff with a finial in the form of Ceres (?) holding a sheaf of corn and a sickle.The edge is encircled by a gold and.

Charles Buteux, père ainé was employed as a painter and gilder between 1756 and 1782. In the 1760s he became a specialist in painting trophies.

The cup bears a date letter which appears to be an F but 1758 is too early for pointillé decoration, and for Buteux to have developed his mature trophy style.

The gobelet litron was named after a cubic measure, the litron, which was normally made of wood, and was used for dry stuffs, such as corn and peas. Its size in Paris had been defined in 1670 as the equivalent of 9.45 cm high and 10.15 in diameter in pouces and lignes, which was larger than the largest of the porcelain cups.The first size of gobelet litron had been introduced at Vincennes before October 1752 when it was mentioned in an inventory of stock, but was probably being made earlier (records are lacking).The second and third sizes followed in 1753, and the fourth and fifth in 1757. They could be fitted with one of seven different handle forms. A drawing in the archives at Sèvres is dated 19 February 1753 (MNS, R1, liasse 2, dossier 2, No. 6bis) They were supplied singly, singly with a plateau carré, in ’harlequin’ sets, or as part of matching dejeuner. (See Documentation, Préaux and d'Albis, 1991, Savill, 1988, Bellaigue, 2009)

This is a gobelet litron of the second size made at Sèvres which ranges from 6.5 - 7 cm high. The handle is Savill's shape C. The saucer however it a little larger, approximating to the first size from 14.3 to 15.5 cm.

Inscription present: an anchor, the left side worn off

Inscription present: joined at the tail