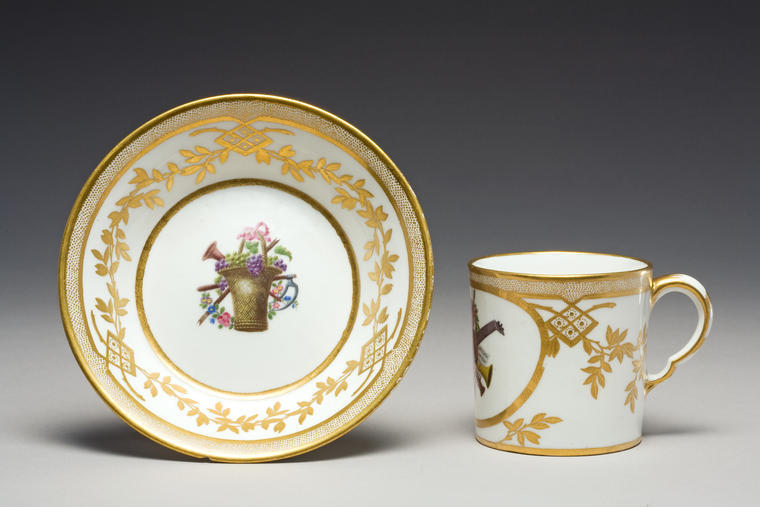 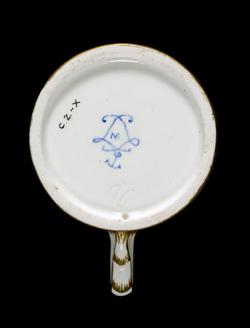 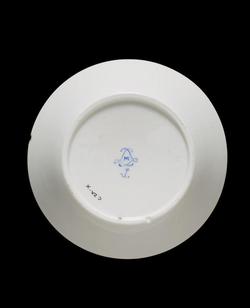 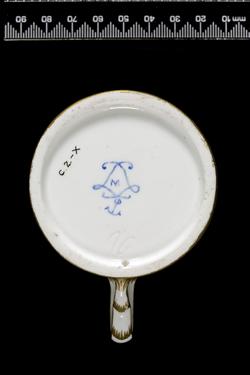 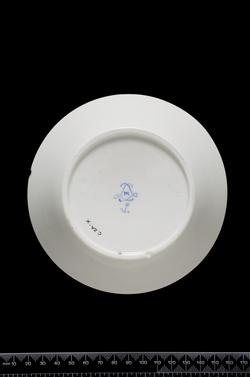 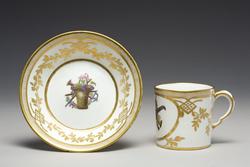 Soft-paste porcelain cup and saucer, painted in enamels, and gilded, with a musical trophy on the front of the cup and a gardening trophy in the centre of the saucer.

Soft-paste porcelain painted in blue, green, yellow, dark pink, purple, brown, grey, and black enamels, and gilding. Cylindrical cup with ear-shaped handle. Circular saucer with convex central area and deep, sloping sides. Both pieces have a suspension hole in the footrim. Both pieces have a white ground. The front of the cup is painted in polychrome with a trophy comprising a guitar tied with a bow of dark pink ribbon, a recorder, and another wind instruments, an arrow, an houlette decked with a dark pink ribbon and garland of leaves, surrounded by a chased gold frame of approximately three-quarters of a circle tooled panels of trellis alternating with smaller plain areas . On each side of the frame there is a gold lozenge enclosing four spots in dotted circles from which are suspended trailing sprays of gilt leaves which cross over under the handle. Round the top of the cup there is a sable d'or border between bands of gilding and there is a further band of gilding round the foot. There are gold lines down the sides of the handle and four horizontal bands of vertical strokes down its back. The centre of the saucer is painted with a gardening trophy comprising a basket of grapes, a hoe, a stick, and a horn surrounded by a band of gilding. The sides are decorated with three gold lozenges similar to those on the cup, linked by trailing sprays of gilt leaves. The border is en suite with that of the cup.

Donor and date of acquisition unknown

Method of acquisition: Unknown by Unknown

The gobelet litron was named after a cubic measure, the litron, which was normally made of wood, and was used for dry stuffs, such as corn and peas. Its size in Paris had been defined in 1670 as the equivalent of 9.45 cm high and 10.15 in diameter in pouces and lignes, which was larger than the largest of the porcelain cups.The first size of gobelet litron had been introduced at Vincennes before October 1752 when it was mentioned in an inventory of stock, but was probably being earlier (records are lacking).The second and third sizes followed in 1753, and the fourth and fifth in 1757. They could be fitted with one of seven different handle forms. A drawing in the archives at Sèvres is dated 19 February 1753 (MNS, R1, liasse 2, dossier 2, No. 6bis) They were supplied singly, singly with a plateau carré, in ’harlequin’ sets, or as part of matching dejeuner. (See Documentation, Préaux and d'Albis, 1991, Savill, 1988, Bellaigue, 2009)

This is a gobelet litron of the second size which was in production by 1753 with Savill's handle shape C, and tooling pattern 5. The trophies are typical of the gaily coloured ones painted by Charles Buteux. Unsuccessful as a figure painter in his early years at the factory, he became ts most prolific painter of trophies and attributes.