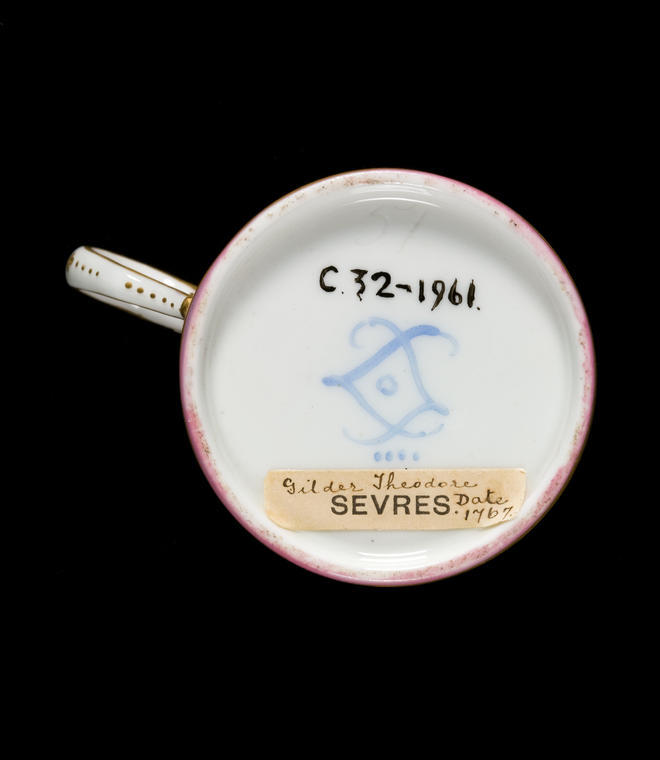 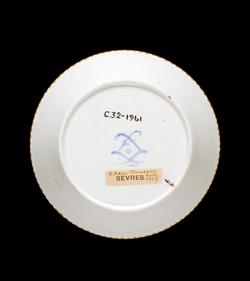 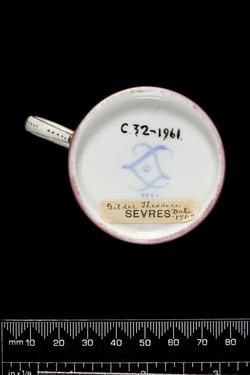 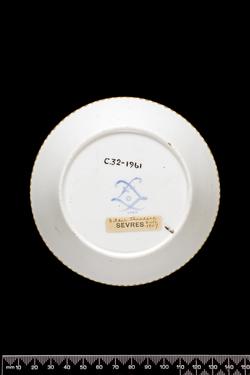 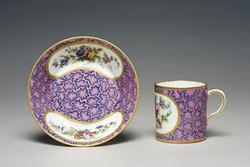 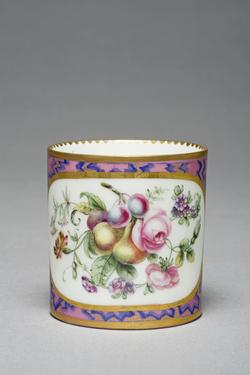 Soft-paste porcelain cup and saucer, with a rose marbré ground, painted in polychrome enamels with flowers and fruit in reserves, and gilded.

Soft-paste porcelain decorated with a rose ground, painting in pale blue, mid blue, green, yellow, pale and dark pink, and red enamels, and gilding. Cylindrical cup with double-curved handle. Circular saucer with flat central area and sloping sides.There is a suspension hole in the footring of the saucer. Both pieces have a rose marbré ground painted with jagged-edged shapes in blue, the spaces between dotted with gilding. The cup has an oval reserve painted in polychrome with flowers and fruit. The saucer has two kidney-shaped reserves painted in polychrome with sprays of flowers and foliage. The reserves are framed by chased gilding. There is a band of gilding round the foot of the cup, dentilated bands round the rims of the cup and saucer and lines of gilding down the sides of the cup handle, which has touches of gilding down the back also.

Mid-18th Century
19th century
Production date: circa AD 1767 : the cup bears the date letter for 1767, but the set may have been decorated later

Rose grounds were introduced in 1757, and rose marbré by 1760, although their first occurrence in the sales records was in 1763. They were fashionable c. 1760-63. They were produced by first laying the rose ground colour and after firing it, applying a blue coating which was allowed to dry and then scraped away to produce a marbled or other variegated pattern. Carmine enamel was then applied, and after that had been fired, the gilding was applied. The technique on this cup and saucer is superficially similar to that used for various variants of rose marbré grounds (see documentaition Eriksen, 1974, and Savill, 1988) but the design is more like irregularly-shaped stars than marbling, and appears to have been painted on rather than executed by the scraping away of the blue technique described as 'gratté dans le fond'. This suggests that the set may be later than is indicated by the date letter, which is unusually late for this technique.

The gobelet litron was named after a cubic measure, the litron, which was normally made of wood, and was used for dry stuffs, such as corn and peas. Its size in Paris had been defined in 1670 as the equivalent of 9.45 cm high and 10.15 cm in diameter in pouces and lignes, which was larger than the largest of the porcelain cups. The first size of gobelet litron had been introduced at Vincennes before October 1752 when it was mentioned in an inventory of stock, but was probably being made a few years.The second and third sizes followed in 1753, and the fourth and fifth in 1757. They could be fitted with one of seven different handle forms . A drawing in the archives at Sèvres is dated 19 February 1753 (MNS, R1, liasse 2, dossier 2, No. 6bis) They were supplied singly, singly with a plateau carré, in ’harlequin’ sets, or as part of matching dejeuner. (See Documentation, Préaux 1991, Bellaigue 2009, Savill, 1988) This is a gobelet litron of the third size with Savill's handle shape B.

The mark of four dots, previously identified simply as that of Théodore (MNS Vj’2) is now recognized as Pierre-Théodore Buteux, who was working at Sèvres from 1765 to 80.