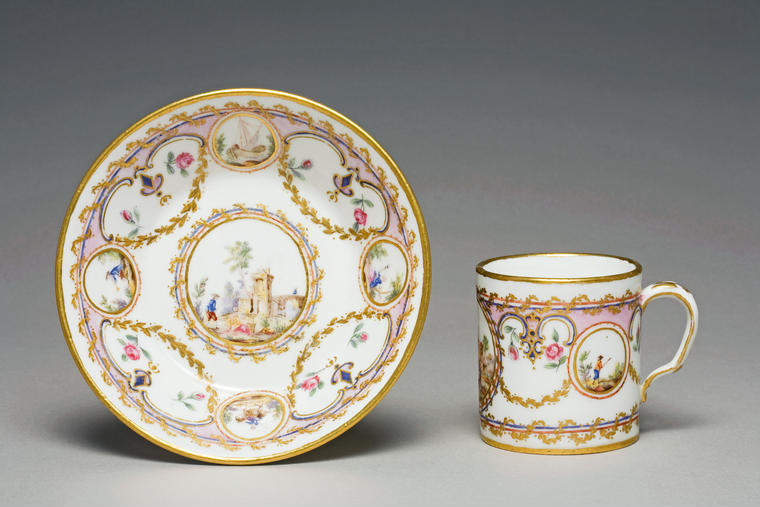 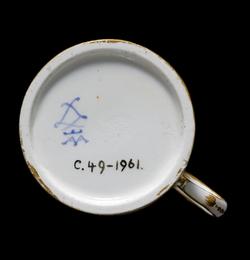 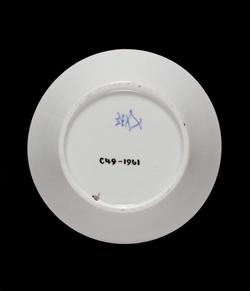 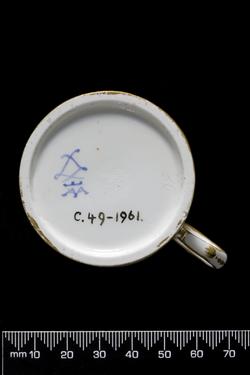 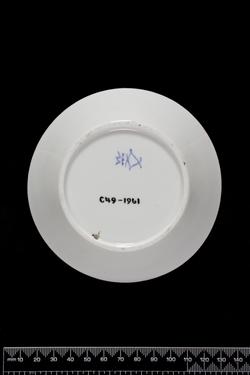 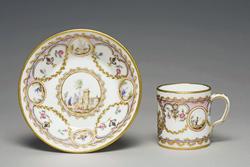 Soft-paste porcelain, painted in enamels with genre scenes in medallions, and gilded.

Soft-paste porcelain decorated in blue, green, yellow, pale pink, crimson, and shades of brown enamel, and gilding. Cylindrical cup with arched and incurved handle. Circular saucer with flat central area and deep, sloping sides. There is a suspension hole in the footring of the saucer. Both pieces are white. The cup has an oval medallion on the front painted in polychrome with a fishing scene and framed by gold, red and blue bands with S-shaped sprays of gold leaves over them. On either side of it there is a smaller circular medallion, one painted with a seated girl holding a fishing rod, and the other with a boy fishing both framed by a gold band and a red band dotted with gold. The medallions are linked by swags of gold leaves. Between the upper edges of the medallions there is a zone with a pink ground which is straight along the top and on its lower edge, between the medallions has pairs of blue and gold C-scrolls with a pendant between them. Below each pair of scrolls there is a crimson rose and a crimson rose bud. Round the top and bottom of the cup there is a border composed of red and blue bands with S-shaped sprays of leaves over them. There is a gold band round the foot and rim; gold lines down the sides of the handle and a leaf and four inverted tear-drop shaped strokes down its back. The saucer has a circular medallion in the centre painted in polychrome with a lady and gentleman and a house beside a river. The sides have four smaller circular medallions, each painted with a different scene: a woman riding a horse; a small ship; a man playing a trumpet; and a woman holding a distaff. The remainder of the decoration is en suite with the cup.

History note: H.E. Backer, London, from whom purchased in December 1944 or shortly after by Louis C. G. Clarke, Leckhampton, Cambridge

The gobelet litron was named after a cubic measure, the litron, which was normally made of wood, and was used for dry stuffs, such as corn and peas. Its size in Paris had been defined in 1670 as the equivalent of 9.45 cm high and 10.15 cm in diameter in pouces and lignes, which was larger than the largest of the porcelain cups. The first size of gobelet litron had been introduced at Vincennes before October 1752 when it was mentioned in an inventory of stock, but was probably being made a few years.The second and third sizes followed in 1753, and the fourth and fifth in 1757. They could be fitted with one of seven different handle forms . A drawing in the archives at Sèvres is dated 19 February 1753 (MNS, R1, liasse 2, dossier 2, No. 6bis) They were supplied singly, singly with a plateau carré, in ’harlequin’ sets, or as part of matching dejeuner. (See Documentation, Préaux and d'Albis, 1991, Savill, 1988, Bellaigue 2009) This is a gobelet litron of the third size, with Savill's handle shape B (see Documentation). When offered for sale in December 1944 it was accompanied by another cup and saucer and a teapot Calabre with matching borders and different scenes in the medallions.