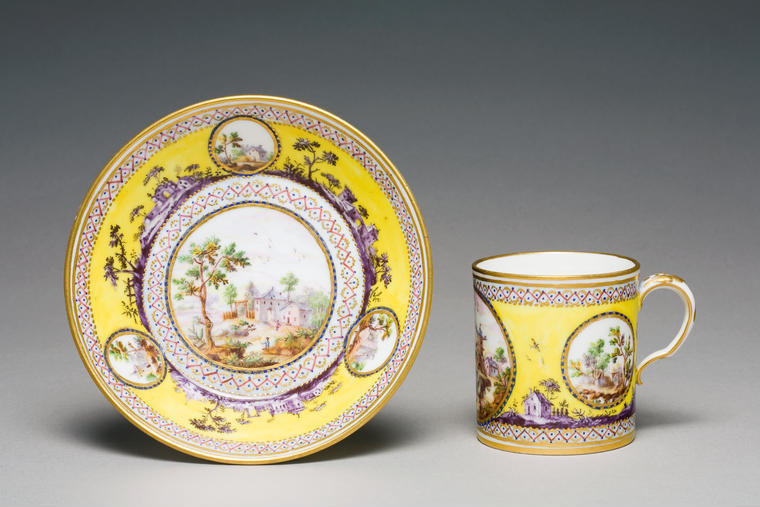 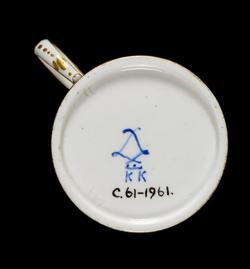 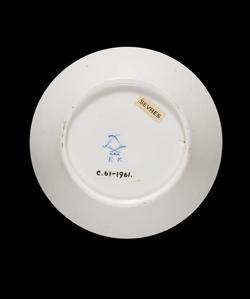 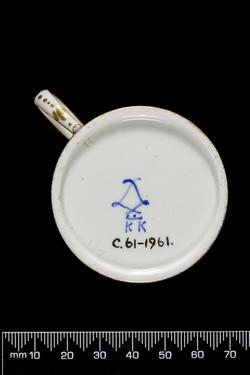 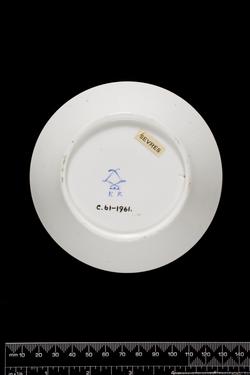 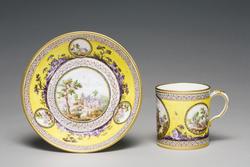 Soft-paste porcelain decorated with a yellow ground, painting in blue, green, yellow, pale pink, a small amount of crimson, brown, and violet enamels, and gilding. Cylindrical cup with double-curved handle. Circular saucer with flat central area and sloping sides. There is a suspension hole in the footring of the saucer. Both pieces have a bright yellow ground decorated with continuous landscapes in violet enamel, with above and below borders of crimson zig-zags, curving gilt lines and blue dots on a reserved white ground. The cup has one large and two small circular reserves, painted in polychrome with landscapes, each framed by a gilt band and a blue band dotted with gold. The large reserve has a windmill beside a house in the background and a seated man in the foreground. There are two gold bands round the foot and rim, gold lines down the sides of the handle and three stylised leaves separated by dots down its back. The saucer has a circular reserve in the centre and three small circular reserves on the sides, each painted with a landscape with buildings and framed with a gilt band and a blue band dotted with gold. There are two gilt bands round the rim.

The gobelet litron was named after a cubic measure, the litron, which was normally made of wood, and was used for dry stuffs, such as corn and peas. Its size in Paris had been defined in 1670 as the equivalent of 9.45 cm high and 10.15 cm in diameter in pouces and lignes, which was larger than the largest of the porcelain cups. The first size of gobelet litron had been introduced at Vincennes before October 1752 when it was mentioned in an inventory of stock, but was probably being made a few years earlier.The second and third sizes followed in 1753, and the fourth and fifth in 1757. They could be fitted with one of seven different handle forms . A drawing in the archives at Sèvres is dated 19 February 1753 (MNS, R1, liasse 2, dossier 2, No. 6bis) They were supplied singly, singly with a plateau carré, in ’harlequin’ sets, or as part of matching dejeuner. (See Documentation, Préaux 1991, Savill, 1988, Bellaigue 2009). This is a gobelet litron et soucoupe of the third size with Savill's handle B.

Yellow grounds were not very common at Sèvres prior to 1775, after which they were popular, especially after 1787. Vielliard père, seems to have been made a speciality of painting landscapes on coloured grounds at the end of the 1780s, but there is a possiblity that this cup and saucer may have been painted by his son André-Vincent Vielliard, fils, who worked at the factory from 1783-93, and adopted a style similar to his father. Roth & Corbeiller (see Documentation 2000), note that on 30 June 1787 Vielliard fils, was recorded as having been paid for painting two cups and saucers with yellow ground, landscapes, and friezes, at 9 livres each set (AMNS, Vj'4, fol. 261). They suggest that this cup and saucer may be one of those two, the other being a similar set in the Wadsworth Athenaeum at Hartford, Connecticut.