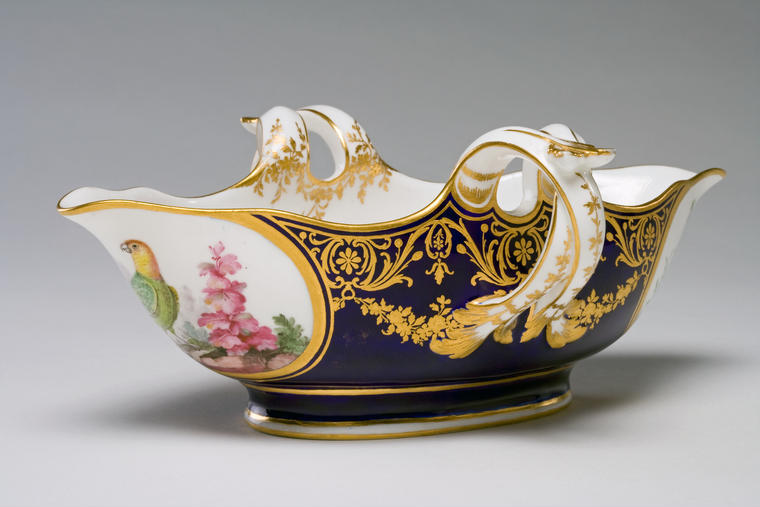 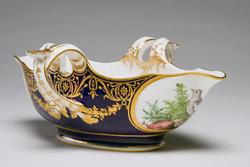 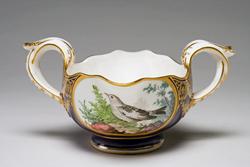 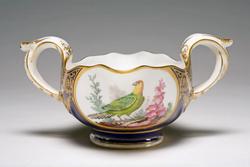 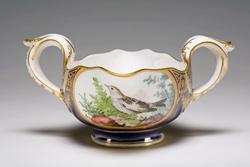 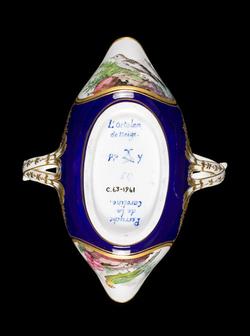 Soft-paste porcelain sauce boat, with a bleu nouveau ground, painted with an exotic bird at each end in enamels, and gilded.

Soft-paste porcelain, moulded, decorated with a royal blue (beau bleu) ground, painting in greyish-turquoise, shades of green, yellow, dark pink, mauve, brown, grey, and black enamels, and gilding. Of elongated oval shape with a lip at each end, standing on a footring. In the middle of each side there is a double-entwined handle wth stylised leaves projecting at the top of the handle and leaves in relief at the junctions of the lower ends with the body. There is a suspension hole in the footring. The ground is beau bleu with at each end under the lip a pear-shaped reserve, framed by a wide and a narrow gilt band, and painted in polychrome with an exotic bird standing amid foliage, the Ortolan de Neige at one end and the Perruche de la Caroline at the other. The ground between the reserves is elaborately decorated with chased gold scrolls, stylised plant forms, and swags of flowers and foliage. There are two gilt bands round the foot with a reserved white band between, and a further gilt band a little higher up. There is a gilt band round the rim, sprays of flowers and foliage on the interior of the body at the junctions of the handles, lines of gilding down the sides of the handles and sprays of foliage down their backs. On the base, inscribed in blue enamel above the mark 'L'Ortolan,/de Neige.' and below the mark, 'Perruche/de la/Caroline.'

The earliest Sèvres ornithological services was made for Charles Lennox, 3rd Duke of Richmond (1735-1806) , the British ambassador to France in 1765-6.

The form was derived from silver sauceboats. Saucière à deux becs appear in the factory inventory of 1756. This was probably one of twelve saucières et plats (the latter missing) included in a dinner and dessert service delivered to J. Lanos and Jean-Fréderic Perregaux of Paris acting for an Englishman, Sudell, possibly Henry Sudell of Ashley House, Box, Wiltshire. The Sudell coat-of-arms was incorporated into the decoration, of the service, but does not appear on this piece. Although the sale was recorded in the factory's records as 31 December 1792 the service does not appear to have been delivered before 7 May 1793 or possibly earlier 7 March 1793. The plate design for the service, no. 140 in the factory's Album of Plate Designs, is entitled 'Oiseaux d'apres la Collection de M Buffon, et le nom de l'oiseau inscrit dessous les pieces. livré 7 Mai 1793/[or 7 Mars 1793]'. For a detailed account of its components and manufacture, see Peters, 2005, vol. IV, p. 1003-5. 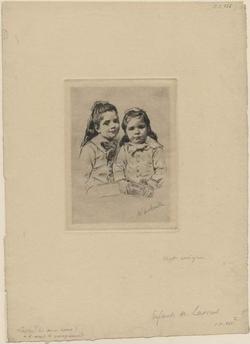 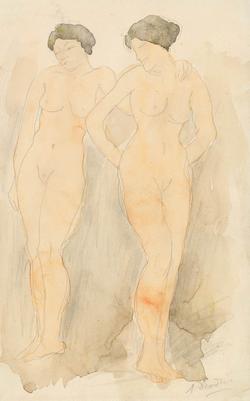 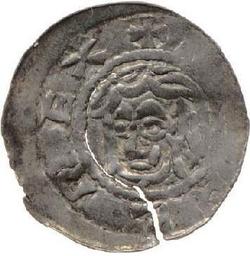 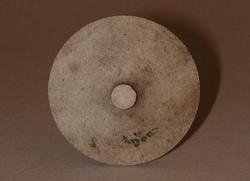