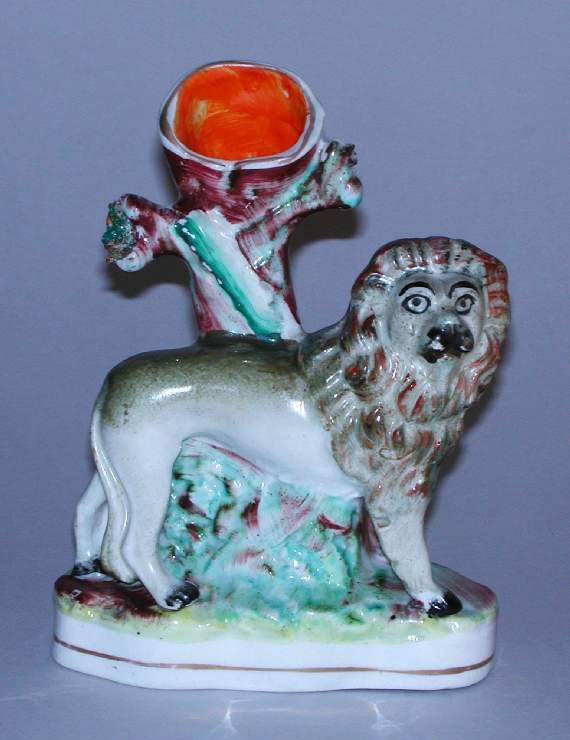 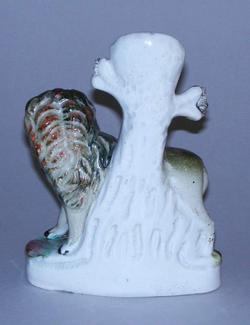 The lion stands with head to the right and facing forwards, on rocky ground and leaning against a tree trunk which is open at the top to form a spill-vase. The lion’s tail runs down its right hind leg, which barely touches the base. The figure is well coloured. The lion’s back is green-brown and its mane red-brown; its eyes are outlined in black and its eyebrows, muzzle and paws are also black. The ground is painted in patches of yellow, green and brown; the tree trunk is brown with a green climbing plant and two branch stubs edged with shards of clay. The inside of the vase is orange. The long oval base is wavy to the front, which bears a gilt line. The underside is concave and glazed. The back is flat, though with some moulded shape.

History note: From the collection of the late Colonel R.G.Turner.

Given by Mrs J E Cameron 1922, from the collection of the late Col R G Turner.

James Dudson at Hanley made a large number of animal figures in the 1830s-40s; from around 1850 until 1865 they made flat-backed figures. The quality of painting on these lions, the outlining of the eyes, and the markings on the flat-backs suggest that these could perhaps be Dudson figures. But there were many other manufacturers of figures working in Staffordshire at this time.

This animal figure is a pair, its companion being a right-facing lion with spill-vase, which is also in the Fitzwilliam collection. Spill vases held tightly rolled scraps of newspaper. They were kept on the mantle-shelf to light the fire, as matches were expensive.

Press-moulding : White earthenware moulded in several parts with small shards of clay added, and lead-glazed. Painted in black, brown, green, yellow, pink and orange enamels, and gilt. The underside is concave and glazed. The back is flat, though with some moulded shape.
Lead-glazing 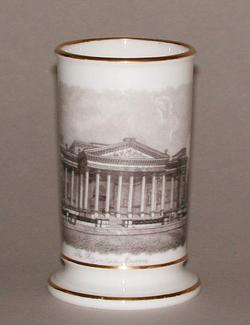 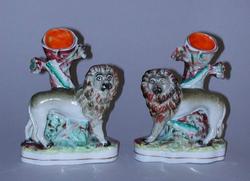 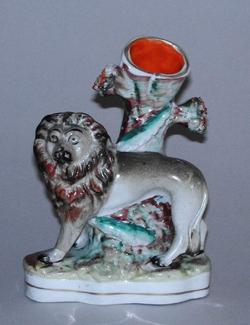 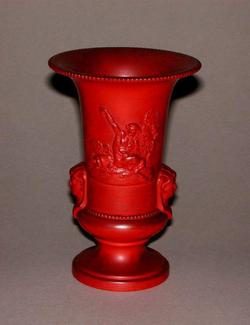