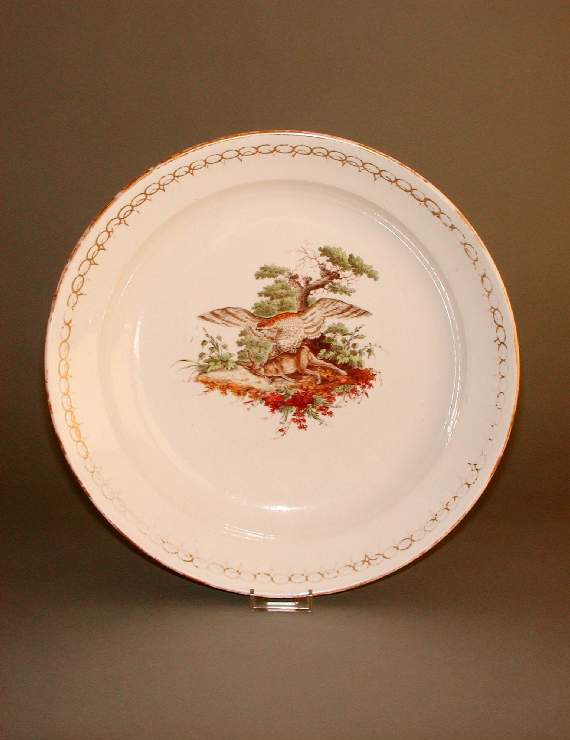 Hard-paste porcelain, moulded, painted overglaze in enamels with an eage perching on a dead hare in front of a tree, and a gold border

Hard-paste porcelain, moulded, painted overglaze in green, yellow, dark rose, beige, several shades of brown and black enamel, and gilt. Circular with a steeply sloping rim, and deep curved well, standing on a footring. Decorated in a centre with a vignette of an eagle perching on a dead hare lying on the ground in front of a partly dead tree, with another tree behind it and low bushes and plants on either side. The lower edge of the vignette is edged by grasses and dark rose foliage pointing downwards. On the sloping rim there is a border of joined oval motifs with a row of continuous arches below which overlap into the ovals at the top. A gold band encircles the edge.

History note: The Rev. G. A. Schneider, Cambridge; sold Sotheby's, 4 June 1942, Catalogue of European Ceramics and Glass comprising the interesting and extensive collection of the Rev. G.A. Schneider . . ., p. 17, part of lot 78; purchased for the Fitzwilliam Museum with money given by Professor Stanley Cook Litt D., FBA, in memory of his wife

Anton Lyncker, a German merchant, and his son ran a porcelain decorating workshop at The Hague from about 1776, when Lyncker became a citizen of the city. Although Lyncker described himself as a porcelain manufacturer, no evidence has been found to support this. He imported soft-paste porcelain from Tournai and hard-paste from Ansbach which he and his employees decorated. After Lyncker's death in 1781, the firm continued under the direction of his widow until 1784. The plate itself is probably Ansbach porcelain which was imported by Lyncker for decoration.

Inscription present: a stork facing to the left

Inscription present: circular printed with the lettering reserved in a black border