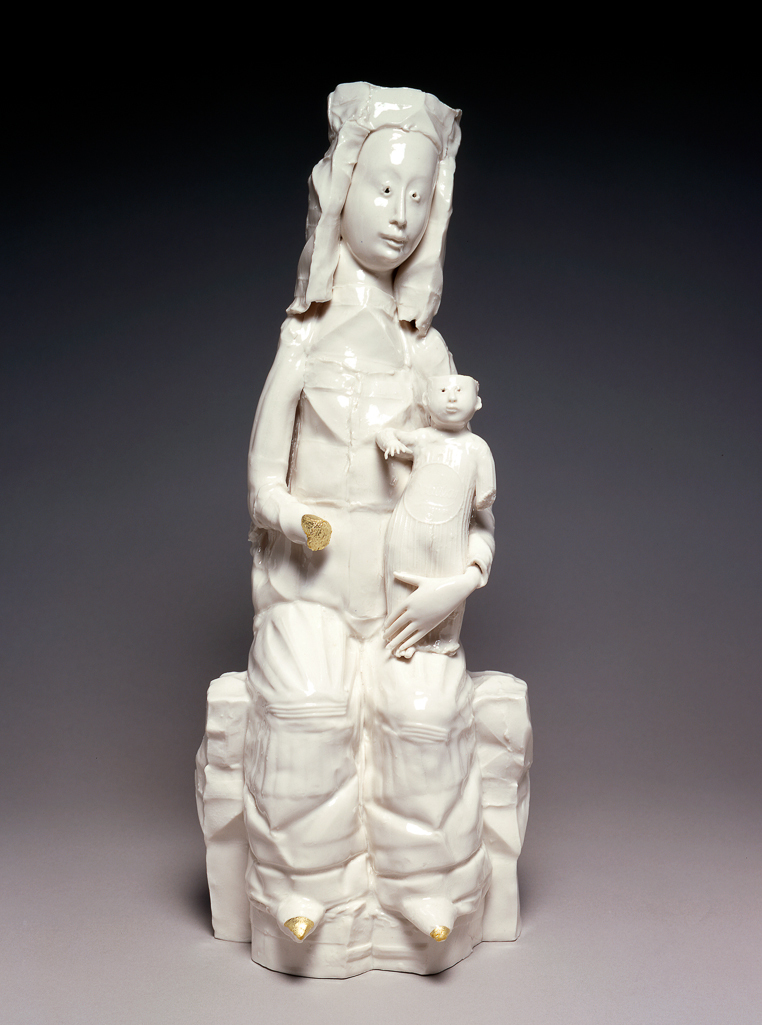 Porcelain, hand-modelled, with closed underside, covered with clear glaze which has crazed. A few small areas are covered in gold leaf. The medieval style Madonnna is seated on a rectangular rocky throne with an incurved lower part on the reverse, and an upright back. Her eyes are pierced and have protruding edges. Her right hand is cut off, and the stump is gilded. She supports the standing Christ Child on her left thigh with her long-fingered left hand. The projecting tips of her pointed shoes are gilded. Her left elbow is stamped with an M in the style of Macdonald's, and there is a row of similar Ms across the back of her headdress. The top of the Christ Child's head is cut off and his left arm above the elbow. His right arm is bent, and raised with the palm of his hand facing downwards. He wears a pleated gown with a stamped or moulded raised circle on the front with relief lettering: 'Popular/BS 1970. 84 (?)/R' [R in a circle]. The viewer's right side of the throne has '49' in relief in a square. On the back of the throne there is a rectangle with relief symbols: a fork and glass, a circle with a curved direction arrow, a triangle enclosing an 'a' with PS reversed below, a man throwing rubbish into a basket, and a circle with CFC in reverse crossed diagonally. The man with a basket is also impressed on the curve of the rock, and on the viewer's left side of the back. On the right side of the back there is a small rectangle of gold leaf and near the top of the back of the Madonnna are the words 'Keep Upright' in relief covered by a curved rectangle of gold leaf.

Text from object entry in A. Game (2016) ‘Contemporary British Crafts: The Goodison Gift to the Fitzwilliam Museum’. London: Philip Wilson Publishers: Philip Eglin studied Ceramics at Staffordshire Polytechnic and the Royal College of Art, London. Whilst at the Royal College of Art, he worked as studio assistant to the sculptor Eduardo Paolozzi (1924–2005) developing a broad knowledge of mould-making and casting processes that continue to inform his working method. In 1986, he established his studio in Stoke-on-Trent, once at the heart of the thriving British ceramics industry, where he combined teaching at North Staffordshire Polytechnic with the development of a highly acclaimed body of contemporary works in clay. This work led to a major Arts Foundation award in 1993 and the Jerwood Prize for Applied Arts: Ceramics in 1996. Eglin’s work draws on both the study of historical objects, from early Renaissance European paintings, to Northern Gothic woodcarvings and Chinese export porcelain as well as his interest in the versatile, mimetic qualities of clay. His figure groups, large vessels and jug forms show reverence for traditional forms but they are wholly contemporary objects. Surfaces are marked, impressed, printed and painted with imagery from sources as varied as Victorian erotic photography, logos from commercial advertising brands and contemporary drawings and images of footballers. His work is collected and exhibited internationally and in 2001 he had a solo show at the Victoria and Albert Museum when a group of ceramic figures, to which this work relates, were shown alongside a selection of the Museum’s Northern Gothic woodcarvings. Eglin’s interest in this particular field had been catalysed by the publication of Paul Williamson’s authoritative study on the subject, Gothic Sculpture 1140–1300 (Yale University Press, 1998). Eglin has continued to exhibit and is collected internationally and, in 2015, he unveiled a major new ceramic commission for York Museums Trust in response to their collection of Northern Renaissance paintings.

Inscription present: in the style of Macdonalds

Inscription present: the R is in a circle, as in Registered 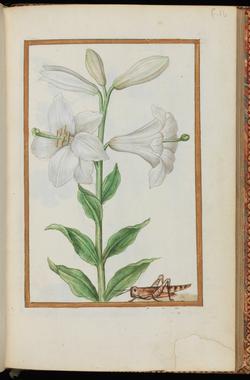 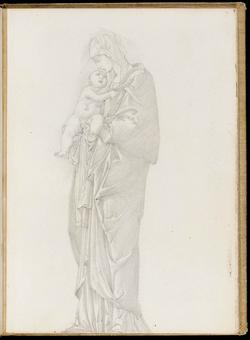 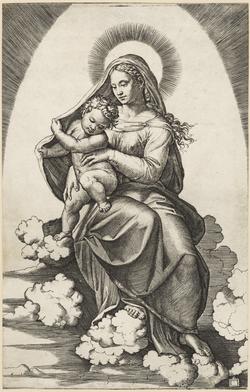 Madonna and Child seated on clouds 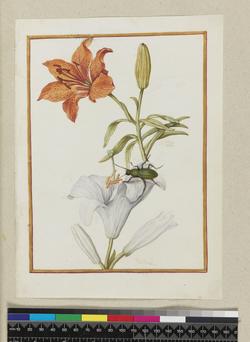