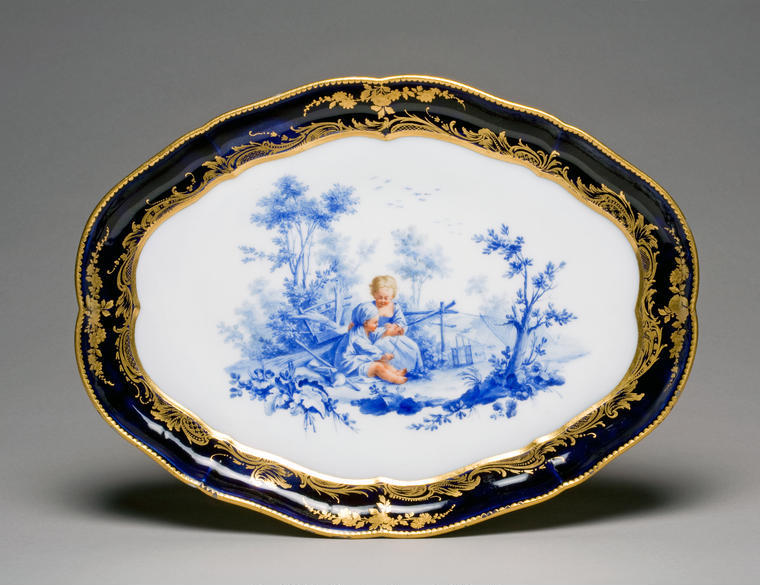 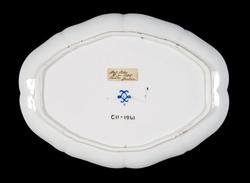 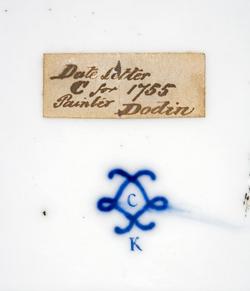 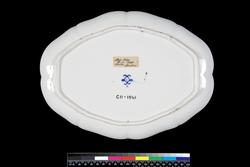 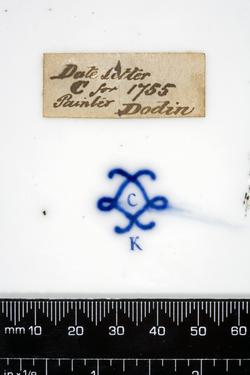 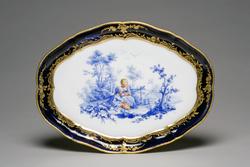 Soft-paste porcelain tray, decorated with a bleu lapis border embellished with gilding, and painted mainly in blue enamel in the centre with a boy and girl seated beside a bird trap in a landscape.

Soft-paste porcelain, decorated with an underglaze bleu lapis ground, painting in blue, flesh-pink, a little red, and pale brown enamels and gilding. Oval with a notch in the rim at each end, and at the centre of each side, shallow curved sides and flat centre. There is a suspension hole in the footring. The central area is painted in blue enamel with a boy and girl seated beside a bird trap in a landscape. Their flesh and the girl's hair are painted in natural colours. The sides of the dish have a bleu lapis ground enriched with a spray of gilded and tooled flowers and foliage at the centre of each side, and round the inner edge with a plain gold band and rococo scrolls and small trellis-filled or striated half oval cartouches. There is a dentilated gold band round the rim and a plain band round the outer edge of the foot.

History note: Purchased from Mallett’s , London for £20 before October 1948 by Louis C.G. Clarke, Leckhampton, Cambridge; bequeathed by him, 1960

Children painted in monochrome blue with coloured faces and hands were popular around 1756. On 20 May 1756 a plateau du Roy of the 2nd size decorated with ‘Enfans camayeux chaires colorées’ with a cup saucer and sucrier similarly decorated costing 144 livres was delivered to M. Bazin. (Archives MNS Vy 1 fol. 125v). The vignette in the centre of this tray was taken from a print by Jean-Baptiste Le Prince (1734-81) 'La Chasse' (after the lower part of a panel . 'La Chassse aux oiseaux et l'Horticulture' painted by Boucher between 1751 and 1755 in Madame de Pompadour's boudoir at the chateau de Crécy, or 'Les Jeunes Oiseleurs', also after François Boucher. (See Documentation, Jean-Richard, 1978). The scene was also executed in polychrome.

This tray has been associated with those described in the factory's archives as plat long uni or plateau ovale in production by 1752. Rosalind Savill, however, believed it to be the form known as a plateau dejeuner du roi first recorded in 1754, and usually supplied with one or two cups and saucers and tea bowl. This example conforms to the first and larger size of two, stated by Savill to be 28.3 to 29 x 21 cm, which is less common than the second size. A model for the tray survives at the factory. 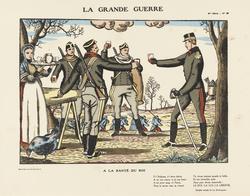 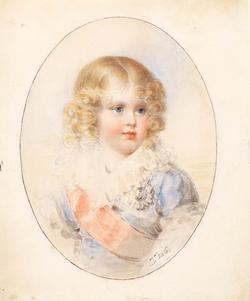 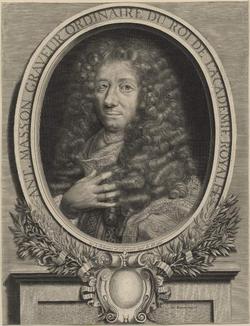 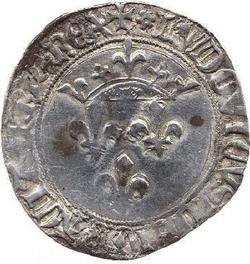 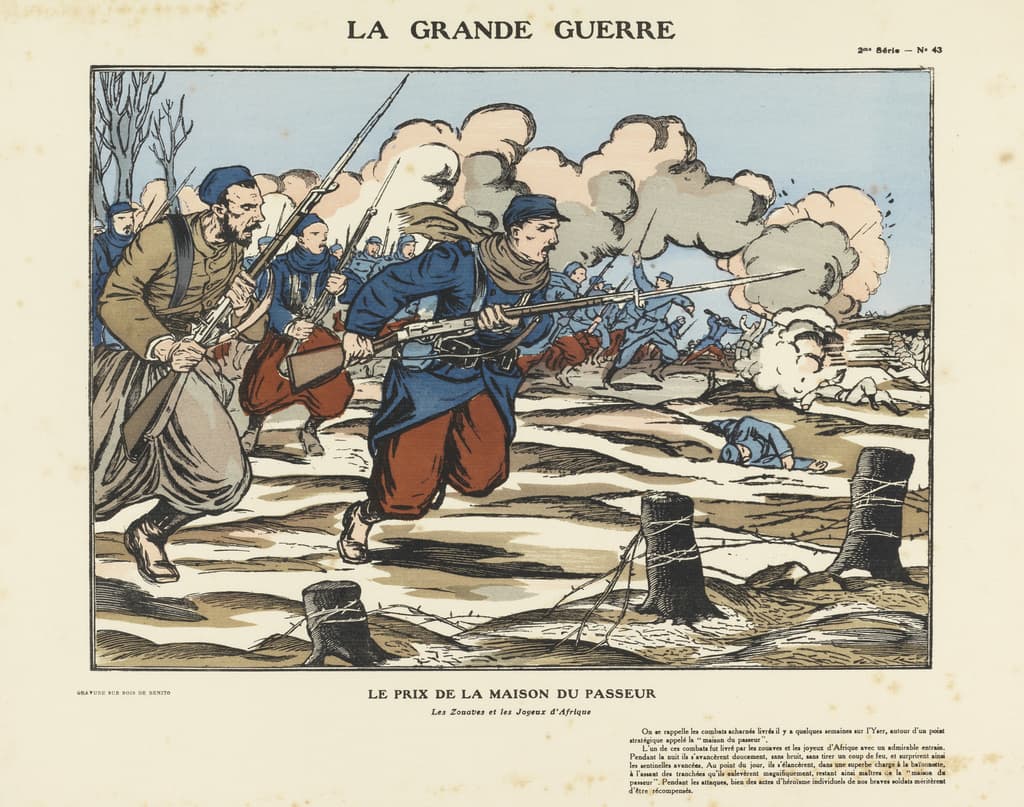 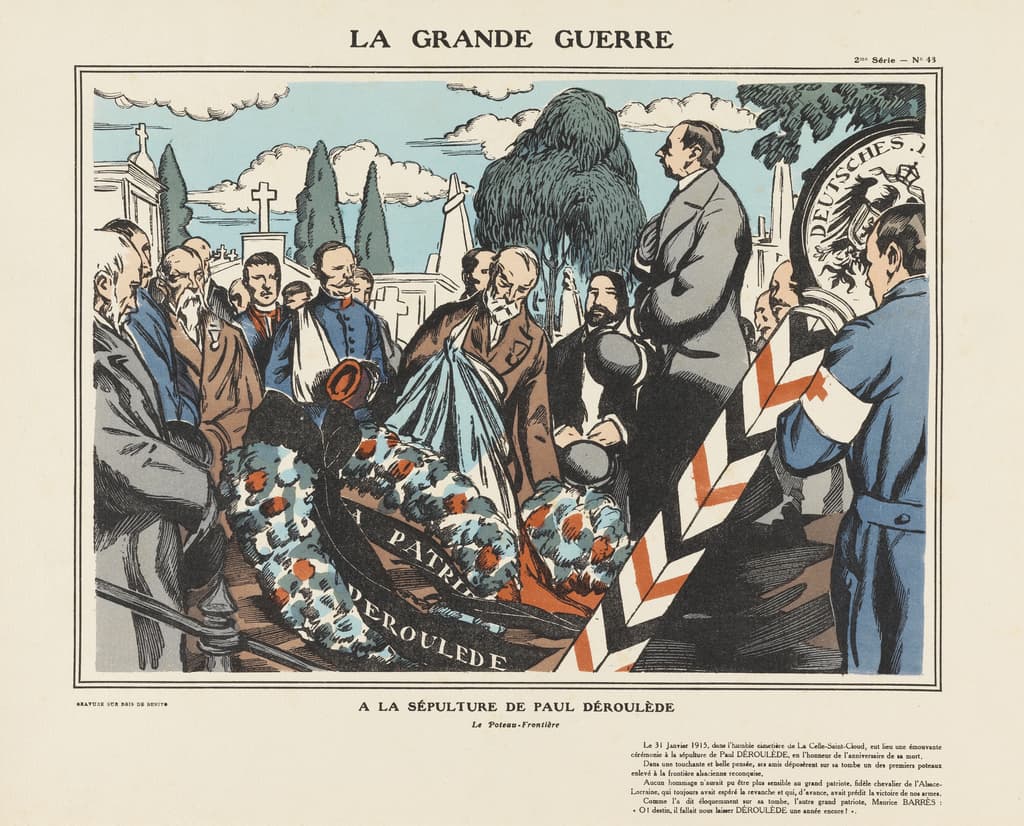