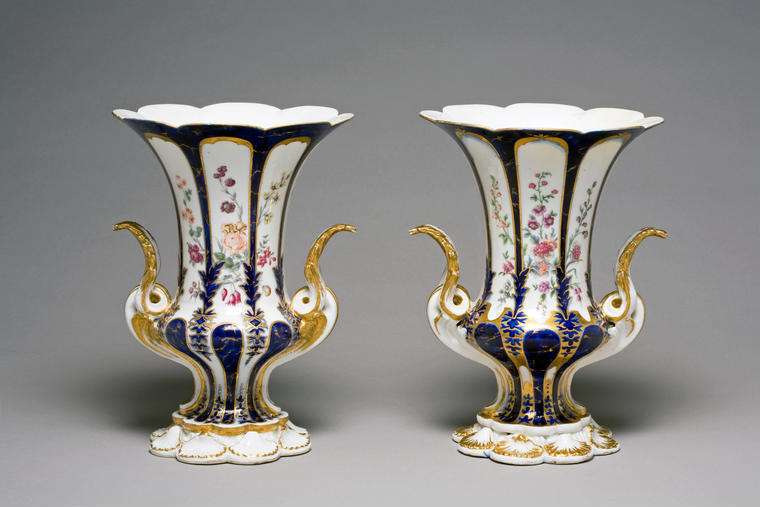 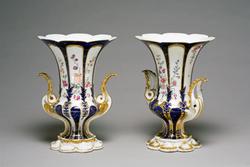 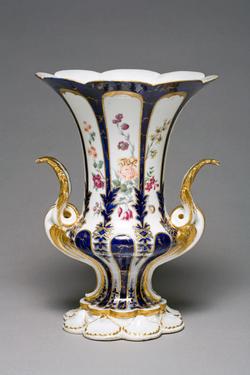 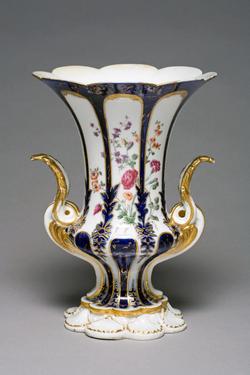 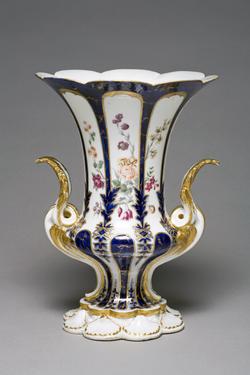 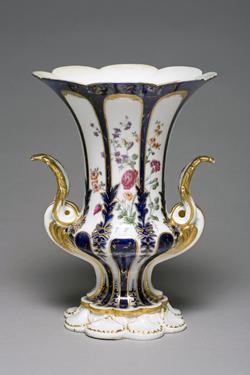 Soft-paste porcelain vase, painted in enamels with flowers in panels reserved in a bleu lapis ground, and gilded

Soft-paste porcelain, moulded, and decorated with an underglaze bleu lapis ground, painting in greyish-green, yellow, pale orange, dark pink, pale purple, and grey enamels, and gilding. The base has an eight-lobed edge decorated with eight moulded cockle shells alternately face up and face down. The foot of the vase has an eight-lobed edge and rises into an incurved stem which expands into the shallow bulb-shaped lower part of the vase. The sides of the vase are trumpet-shaped, and it has eight scallops round the rim. On each side, is a handle rising from the foot into an elaborate scroll, joined to the widest part of the bulb and rising above to form a hollow foliated projection. The decoration is of alternating areas of bleu lapis lightly marbled with gilding and white panels painted on each side of the upper part with a spray of flowers which ignores the blue divisions. On the stem the white panels are decorated underglaze in blue with four trefoil-shaped leaves with three dots above.The edges of the bleu lapis areas, the edges of the handles, the upper part of the base and the edges of the shells are gilded. A non-identical pair with C.9-1961

This flower vase, and its companion C.9-1961,can almost certainly be identified as the form described at Vincennes as 'vase Duplessis' which was named after the designer, Jeanne-Claude Duplessis (d. 1774 ). The 'vase Duplessis' was made in four sizes, and in three main shapes, differing in details. One, represented by the Fitzwilliam’s pair, has a lobed foot and rim, and stands on either a low rocky base or a shell base. The body, rim, and handles but not the foot conform to an unsigned drawing at the factory (R.1, liasse 3, dossier 6, fol. 2; fol. 1 shows outline minus handles). It does not conform exactly to any of the three plaster models which survive, although its basic outline is similar to 'vase à fleurs Duplessis uni' (see Documentation, Troude), The other versions were known as 'vase Duplessi enfants' and 'vase a fleurs Duplessis orné' For illustrations of all three forms, see Documentation, Roth and Corbeiller. Examples of the 'vase Duplessis' were fired in 1748 and in 1751 the posthumous inventory of the director, Jean-Henry-Louis Orry de Fulvy (1703-51) begun on 26 May 1751 mentions seven vases whose descriptions appear to corre¬spond to it, and which were described twice, once as part of his own estate and again on 15 September when it had been found that they belonged to the factory. Four sizes were mentioned among glazed and fire pieces in the inventory of 1 October 1752, of which the first size was the largest, and in the sale room there were nine decorated with a lapis ground and flowers but defective and only valued at 60 livres each. (MNS I 7 Inventaire géneraux/de la Manufacture 1752, p. 23-4 and p. 39).The first mention of the sale of a vase Duplessis in the marchand-mercier, Lazare Duvaux’s 'Livre Journal' was on 16 January, 1752 to a M. Leonor La Resnaye, for 84 livres. The factory's sale ledger's record sales of vases Duplessis with a lapis (bleu lapis) ground and floral decoration on 25 January 1753 (Vy 1, p. 7 verso). three of the first size on 9 April 1753 (Vy 1, p. 11 recto), two of the first size on 19 July 1753, and three of the first size on 14 October 1754. In addition to this one, seven vases Duplessis with bleu lapis grounds and scalloped rims are known, each decorated slightly differently with regard to the areas of ground colour and the shape of the handles and base: one in the Fitzwilliam Museum (C.9-1961) one in the Louvre (OA 7610) two in the Mineappolis Museum of Art (82.2.1 and 82.2.2), one in the Hermitage (3Ф23291), one in the Belvedere Collection (Catalogue no. 86), one with Adrian Sassoon, London, in Summer 2008 (inv. no. 979). A smaller and later example of 1759-60 with a plain rim, and a large floral reserve on each side, is in the Victoria & Albert Museum (C.1363-1919). 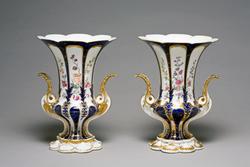