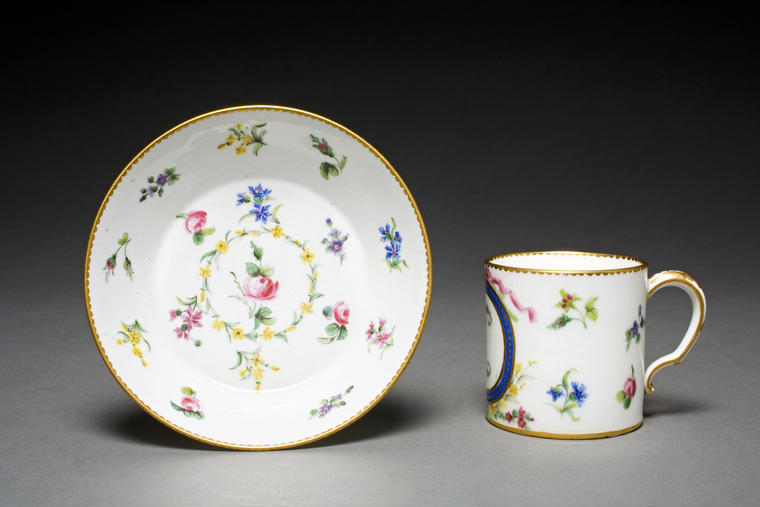 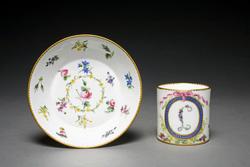 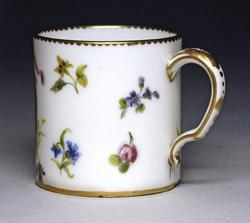 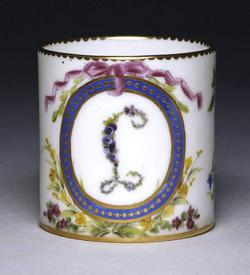 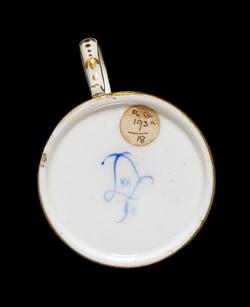 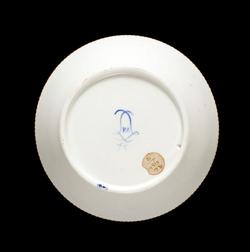 Soft-paste porcelain cup and saucer, painted in enamels with an oval medallion containing a floral L, with sprays of flowers, and gilded edges.

Soft-paste porcelain painted in blue, green, yellow, pink, and purple enamels, and gilded. Cylindrical cup with double-curved handle. Circular saucer with flat central area, sloping sides, and a suspension hole in the footrim. The cup is decorated on the front with a script L made up of purple flowers and green leaves enclosed by a blue and gold oval frame tied with a bow of pink ribbon at the top, and resting on sprays of yellow and dark pink flowers and leaves at the bottom. On each side there are four small sprays of flowers and leaves. There is a dentilated gold band round the rim, a plain band round the foot, and lines of gold down the sides of the handle, which also has a gold stylised leaves and spots down its back. The saucer has a rose spray in the centre surrouned by a garland of yellow flowers and green leaves. The remainder of the central area, and the sides are scattered with small sprays of flowers and leaves, including rose, violet and cornflower, and a yellow flower. A dentilated gold band encircles the rim.

The gobelet litron was named after a cubic measure, the litron, which was normally made of wood, and was used for dry stuffs, such as corn and peas. Its size in Paris had been defined in 1670 as the equivalent of 9.45 cm high and 10.15 cm in diameter in pouces and lignes, which was larger than the largest of the porcelain cups. The first size of gobelet litron had been introduced at Vincennes before October 1752 when it was mentioned in an inventory of stock, but was probably being made a few years.The second and third sizes followed in 1753, and the fourth and fifth in 1757. They could be fitted with one of seven different handle forms . A drawing in the archives at Sèvres is dated 19 February 1753 (MNS, R1, liasse 2, dossier 2, No. 6bis) They were supplied singly, singly with a plateau carré, in ’harlequin’ sets, or as part of matching dejeuner. (See Documentation, Bellaigue 2009, Savill, 1988) This is a gobelet litron of the second size with Savill's handle B. This size was usually supplied separately rather than in a tea set.

The painting was formerly attributed to Jean-Pierre Fumez, but his mark was fz. The mark fx was used by Mme Françoise-Philippine (née Le Grand), a flower painter working at Sèvres, ? 1780-99 ? (See Documentation, Peters, 1997).The incised mark, 44, occus mainly on saucers and cups from the 1760s to 1790s