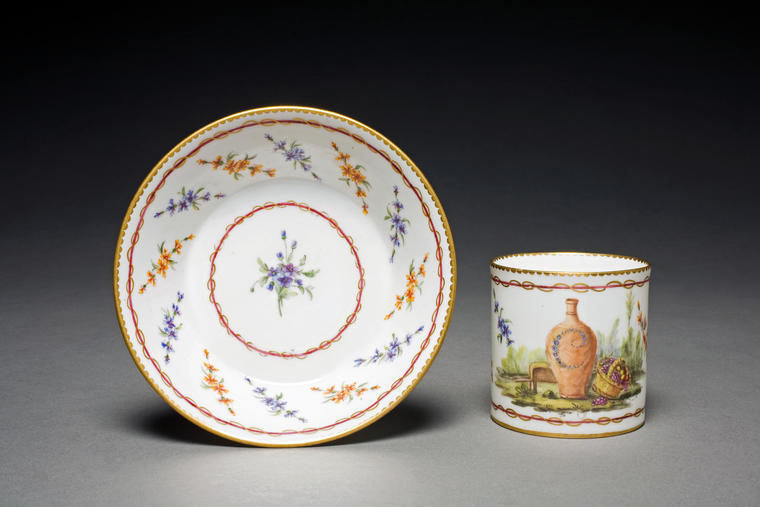 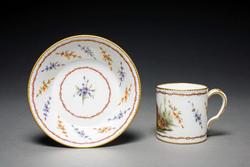 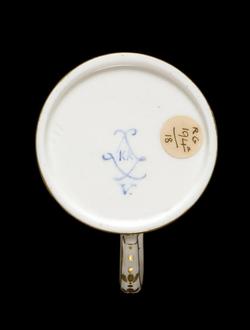 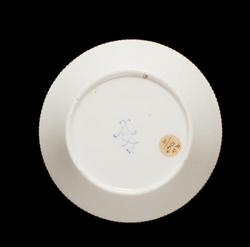 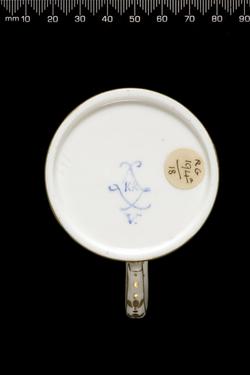 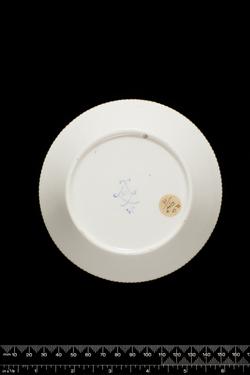 Soft-paste porcelain painted in enamels with a garden scene incorporating a jar with the letter C, sprays of flowers, and gilding.

The gobelet litron was named after a cubic measure, the litron, which was normally made of wood, and was used for dry stuffs, such as corn and peas. Its size in Paris had been defined in 1670 as the equivalent of 9.45 cm high and 10.15 cm in diameter in pouces and lignes, which was larger than the largest of the porcelain cups. The first size of gobelet litron had been introduced at Vincennes before October 1752 when it was mentioned in an inventory of stock, but was probably being made earlier.The second and third sizes followed in 1753, and the fourth and fifth in 1757. They could be fitted with one of seven different handle forms . A drawing in the archives at Sèvres is dated 19 February 1753 (MNS, R1, liasse 2, dossier 2, No. 6bis) They were supplied singly, singly with a plateau carré, in ’harlequin’ sets, or as part of matching dejeuner. (See Documentation, Savill, 1988, Bellaigue 2009) This is a gobelet litron of the second size with Savill's handle B.

The painter's mark does not occur in MS Vj’2 but has been deduced from payments in the Artistis Lists of payments as that of Mme Antoinette-Marie Noualher (née Huet) , working from c. 1762-98. An almost similar mark was used by her daughter from c. 1790-98, and possibly earlier in the late 1780s, who about 1796 became Mme Weydinger.

Inscription present: 41 with the 1 slanting to the right

Inscription present: 3 a dash, longer than shown above, 1 slanting, possibly 31 or 37