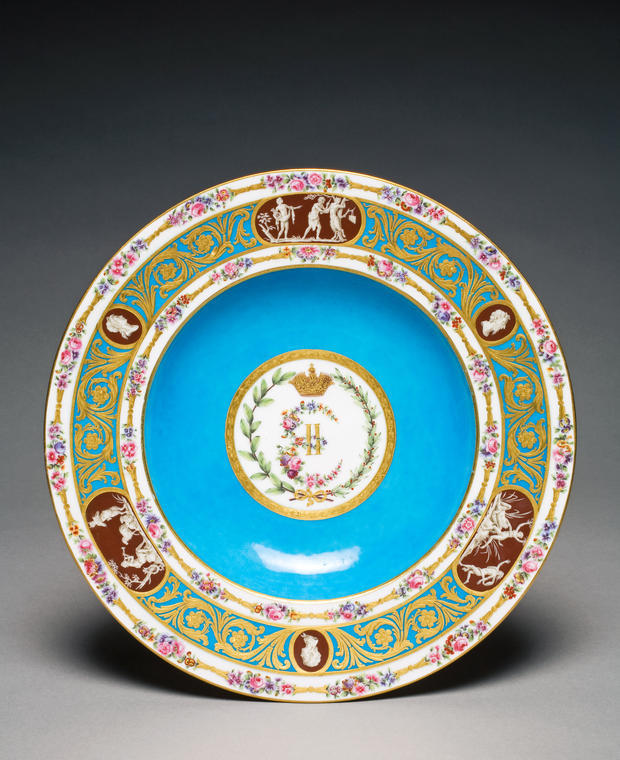 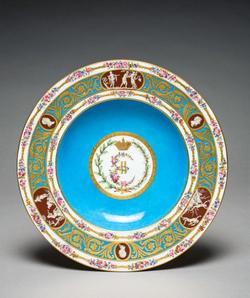 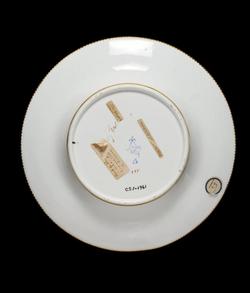 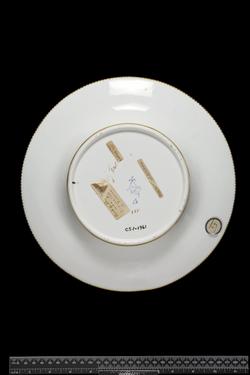 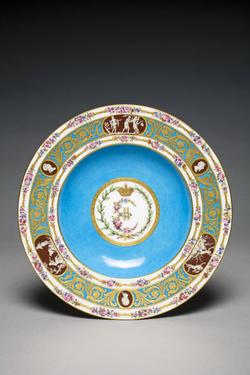 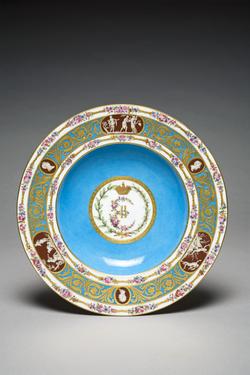 Plate from the Empress Catherine Service

Soft-paste porcelain decorated with a turquoise (bleu céleste) ground, painting in blue, green, pink, red, and dark reddish-brown enamels, transfer-printed cameo heads painted in reddish-brown enamel, and chased gilding. Circular with a wide rim, and deep well, standing on a fooring with a suspension hole. The dish is heavy for its size. The well has a turquoise (bleu céleste) ground with a central circular reserve framed by a chased gold band. Within it is a wreath made up of branches of laurel and myrtle, tied with a gold bow at the bottom. At the top the branches meet on either side of a gold Imperial crown. Within the wreath is a large script E made up of pink and blue flowers in monogram with 'II' in gold, for Ekaterina II. The rim has white inner and outer borders decorated with small floral sprays separated by husks. Beween them is a broad turquoise band decorated with finely tooled gold foliated scrolls, interupted by three small oval reserves and three larger horizontal oval reserves, each painted en grisaille on a reddish-brown ground to imitate cameos. The small reserves enclose profile heads, respectively of a young woman, a young man, and Pan. The larger reserves enclose mythological scenes from Ovid's Metamorphoses: Apollo and Daphne from Book 1; The competition between Apollo and Marsyas, and the Flaying of Marsyas from Book 6. There is a gold band round the edge, dentilated on the reverse, and a wide gold band round the outer edge of the footring.

History note: William Ward (1817-85) 1st Earl of Dudley; sold Christie's, 21 May 1886, Catalogue of the Splendid Collection formed by the Right Honourable the late Earl of Dudley from the most celebrated cabinets which have been dispersed during the last fifty years which (by order of the Executors), lot 95, 108 guineas. D.M. Currie; Mrs Alistair Currie, sold Christie's, 13 June 1946, Catalogue of Old French Furniture and Sèvres Porcelain . .. p. 7,, lot 55 sold for 78 guineas to F. Partridge for L.C.G. Clarke, MA, Leckhampton, Cambridge (1881-1960).

This is one of 288 plates from a dinner and dessert service of 797 pieces made for the Empress Catherine the Great of Russia (1729-96), which was ordered in 1776, and was despatched to St Petersburg in June 1779. The service was remarkable for its immense size, and the speed with which it was made. It was the first wholly neoclassical service to be made at Sèvres, and the forms were specially designed for it, the plates for example having smooth instead of lobed rims. The use of illusionistic cameos in the decoration reflected the Empress's interest in this aspect of antique art, and innovatory techniques were used to produce them. The outlines of those on the plates were transfer-printed before painting, a technique not normally employed on Sèvres porcelain. For descriptions of the service, see Savill (1988), Dawson (1994), and Peters ( 2005, III). The Fitzwilliam Museum also owns a jug from the service, C.47-1961.

Inscription present: circular label printed round the edge with a narrow blue band and a wider blue band

Inscription present: rectangular with the left end torn off

Inscription present: rectangular with part of the right side torn off 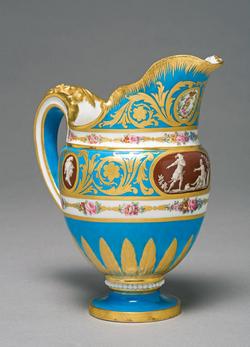 Jug from the Empress Catherine II of Russia Service 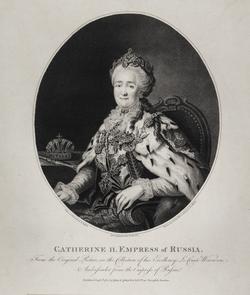 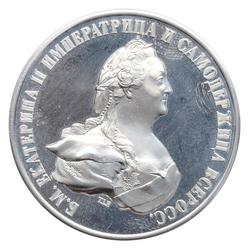 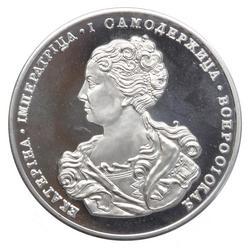