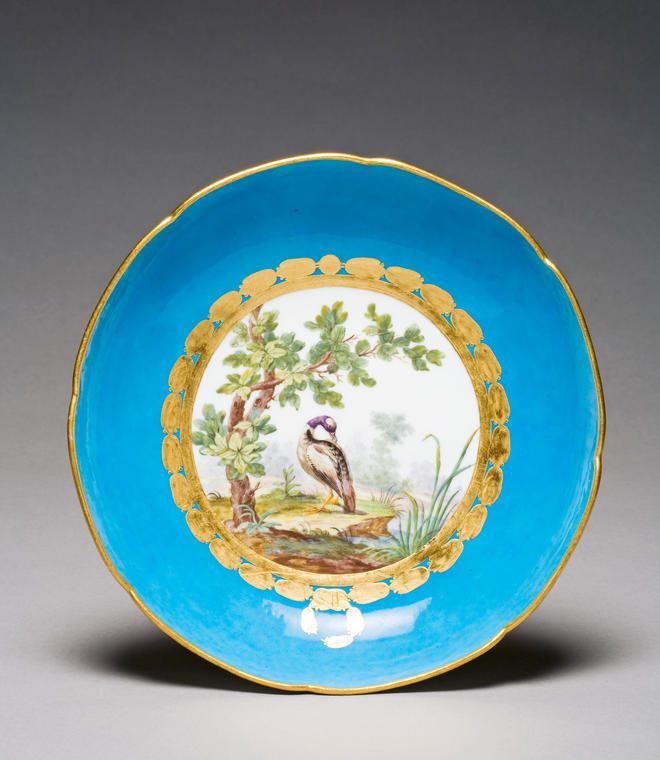 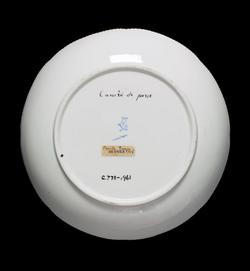 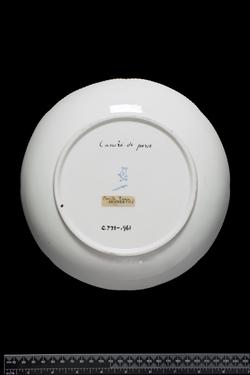 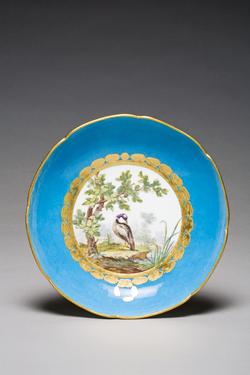 Soft-paste porcelain dish, decorated with a bleu céleste ground, a reserve painted in enamels, with a bird and a tree in landscape (Canard de perie), and gilding

Soft-paste porcelain decorated with a bleu céleste ground, painting in greyish-blue, several shades of green, yellow, pale purple, grey, brown, and black enamels, and gilding. Circular with deep, curved sides, the rim divided by indentations into eight segments. There is a suspension hole in the footring.The dish has a bleu céleste ground with a central, circular reserve framed by an inner band of gilding tooled with scrolling leaves, and an outer garland of large husks. The reserve is painted in polychrome with a duck standing on the right of a tree in a landscape with a pond or river on the right. Its name 'Canard de perie' is inscribed in black enamel on the base. There is a band of gilding round the rim, dentilated on the exterior.

Bird decoration after George Edwards was first used at Sèvres on the service commissioned by the 3rd Duke of Richmond (1735-1806) in November 1765, and made in 1766 (with one exception of 1765). This was probably followed by the Razumosvsky Service of 1767 (except one piece 1766). At least five other services or groups of pieces are known between 1767-1770 which have comparable decoration and the names of the birds inscribed on the bases. They can be distinguished by the different designs of their gilding. This compotier and its pair probably belonged to a service with gold husks around the reserves which in the late 19th century belonged to Count A.D. Sheremetev (or Chérémèteff), of St Petersburg. Part of the service, not including the compotiers ronds, was displayed in London by Asher Wertheimer in Bond Streeet, with other Sèvres from the Sheremetev collection in 1906 (see Documentation). David Peters identified the service as one purchased on 5 November 1768 by an unnamed buyer, whom he considered was probably the M. de Cotensky who bought twenty-four plates and two seaux à glace on 9 March 1769, pieces not included in the earlier anonymous order. Peters identified Cotensky as probably Nikolai Konstantinovich Chotinski, Russian chargé d’affaires to France from 24 December 1767 to January 1774, and again from 28 August 1780 to 25 April 1782. This would account for the presence of the service in Russia. This hypothesis is supported by the presence of two seaux à glace of similar format and with the same gilding design, with the date letter for 1769, in the Dodge Collection, at the Detroit Institue of Arts. The service ordered in November 1768 included 8 compotiers at 45 livres and 8 compotiers at 51 livres.

George Edwards, 'A Natural History of Birds', was published in London in four volumes in 1743, 1747, 1750 and 1751. A French edition was published in 1745, 1747, and vols 3 and 4 in 1751.The 'Canard de perse; on C.37B-1961 was after pl. 100, which Edwards describes as 'The little Black and White Duck', and in the French edition, 'Histoire Naturelle de Divers Oiseaux', also 1747, it is called 'Le petit Canard noir et blanc'. Selma Schwarz noted that many of the names of the birds inscribed on the porcelain services do not coincide with the names given by Edwards, as these do not. The painters often added a place of origin drawn from the text, but sometimes inaccurately as a result of misunderstanding. Etienne Evans, was one of the factory’s leading bird painters, but was not so talented as Louis-Denis Armand, Aloncle, or Chappuis. His was described as ‘travaillant fort médiocrement’ in 1755. 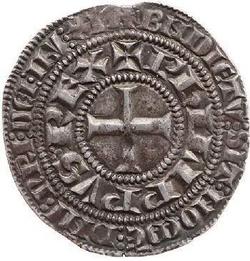 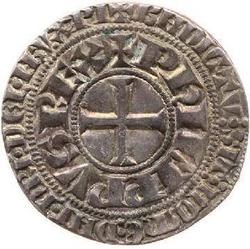 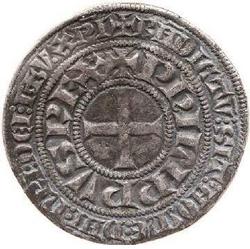 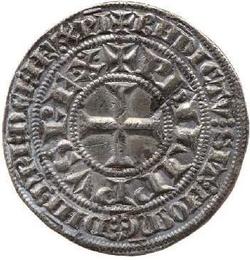