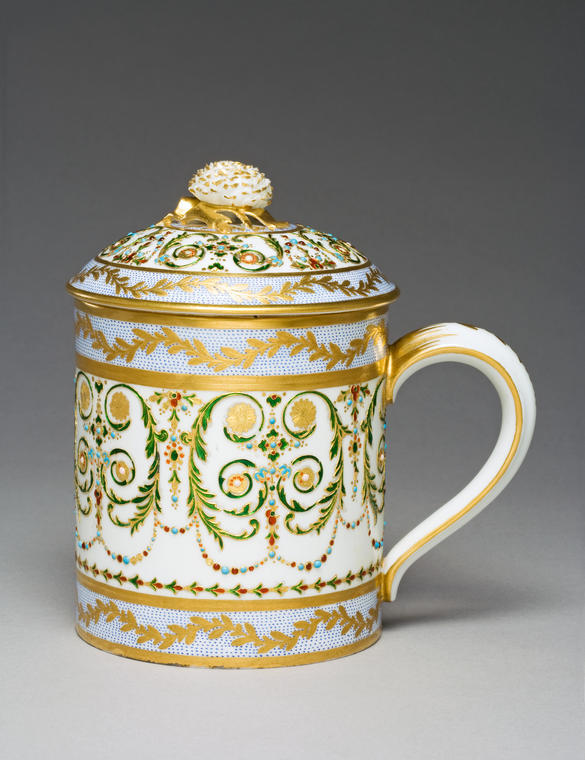 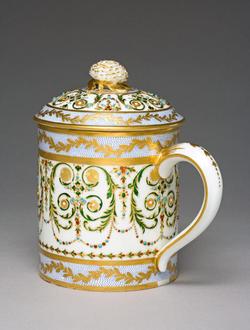 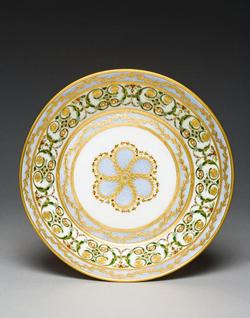 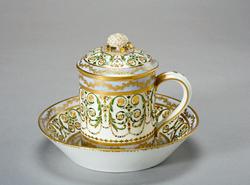 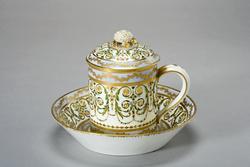 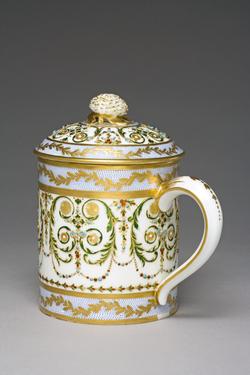 Soft-paste porcelain decorated with a pale yellow ground, gold paillons and with green, and red translucent enamels, and and blue and opaque turquoise enamels. Cylindrical cup with a single loop handle and domed cover surmounted by a finial in the shape of a multi-petalled flower on a stalk and two leaves. Circular saucer with wide, flat base and deep sloping sides. Both cup and saucer have a suspensionhole in the footring, and there is also one in the rim of the cover. The ground of all three pieces is an extremely pale yellow. The main field of the cup is decorated with alternately facing and backing foliate scrolls ending in paterae, joined by swags of 'jewels' and separated by formal arrangements of stylised flowers. Below is a band of conjoined stylised green and red buds. The borders above and below are composed of a wavy band of trailing leaves on a blue stippled ground between two wide gold bands tooled with two rows of inverted v s with cross-over bands at intervals. There are gold lines down the sides of the handle and three husks and dots down its back. The cover is decorated en suite. The flower is touched wth gold and the leaves are entirely gilt. In the centre of the saucer there is a six-petalled, stylised flower, outlined by gold leaves and conjoined green and red buds, the area within the outlines stippled with blue. The sides are decorated with a smaller version of the design on the cup, set between identical borders. There is a dentilated gold band round the rim.

Jewelled enamelling is recorded as being introduced by Philippe Parpette, a flower painter, and Joseph Cotteau, an enameller in 1778. Parpette worked mainly on this type of decoration between 1780-5. The latter left the factory in 1784, and after 1786 this type of decoration was rarely executed. The decoration of this 18th century set, however, may have been applied in the 19th century.

Large covered cups and saucers were used to take hot milk drinks or chocolate and earlier examples were frequently described in the factory's records as a 'gobelet à lait'. 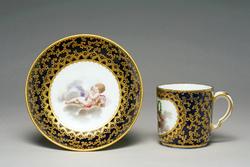