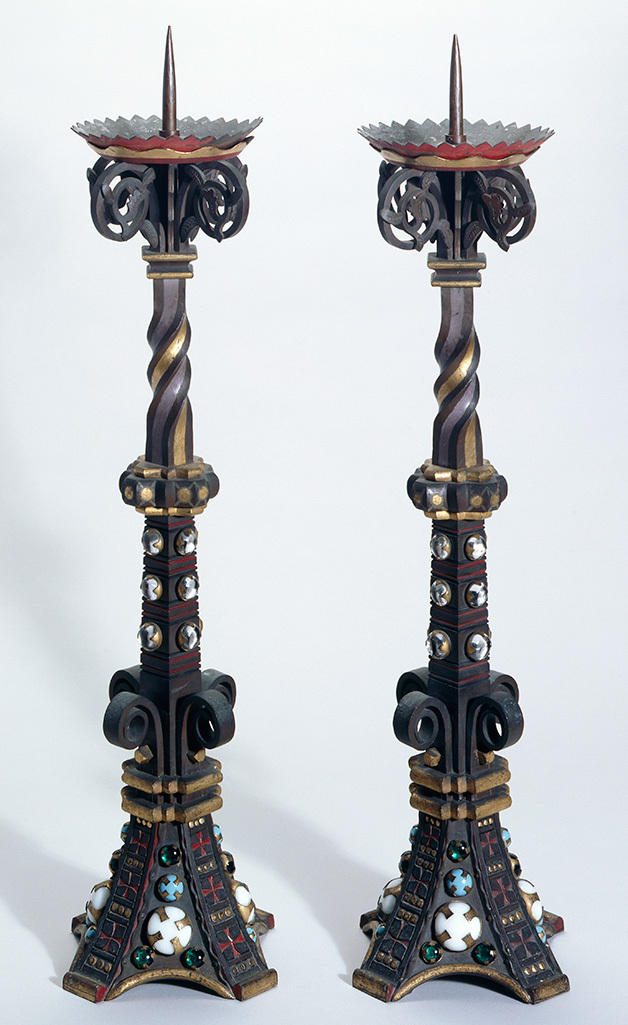 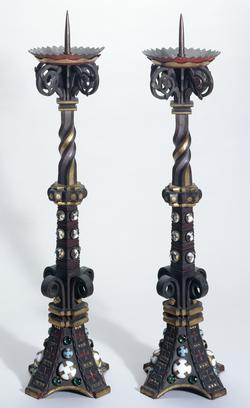 Bronze, with painted and gilded decoration, set with clear and coloured glass cabochons

Bronze, studded with claw-set circular cabochons of graduated sizes, in clear, translucent dark green, opaque white, and opaque turquoise glass, and embellished with red and pale purple paint, and gilding. Each candlestick has a splayed octagonal base with four curved sides and four straight sides; a straight, four-sided section with four outward curving scrolls at the bottom; a four-sided twisted section; and at the top, four foliated openwork scrolls supporting a shallow, concave drip-pan with a wavy edge, in the middle of which is a pricket. On top is a removable drip-pan with a zig-zag toothed edge, and a central hole enabling it to fit over the pricket. The sections are separated by differently-shaped collars.

Method of acquisition: Given (1994-10-10) by The Friends of the Fitzwilliam Museum

A talented Gothic Revivalist architect based in the south­west of England, William White built a successful career around his concept of ‘domestic gothic’ and the importance of colour, occasionally designing metalwork, such as these altar candlesticks, to harmonise with his polychromatic colourful interiors. These were made for the private chapel of Bishop’s Court, Clyst St Mary, Devon, which White completed in 1864. They remained on the premises until they were sold from there on 26 September 1994. Bishops Court, a medieval residence of the Bishops of Exeter, was purchased in 1833 by John Garrett, a wealthy tea merchant who had been Lord Mayor of London. He died in 1859 and the house was rebuilt between 1860 and 1864 for his son, another John Garrett, to the designs of Wiliam White (1825-1900), who also designed furniture and metalwork, including these candelsticks, for the house. White, who had been a fellow-pupil of G.E. Street and G.F. Bodley in the office of George Gilbert Scott, was one of the most inventive High Victorian architects. These candlesticks are exceptionally vigorous and trenchant specimens of Reformed Gothic design. White's client, John Garrett, was a founder member of the Exeter Diocesan Architectural Society, and is likely to have come into contact with the architect through the latter's many ecclesiastical works in the West Country.

One of a pair of alter candlesticks 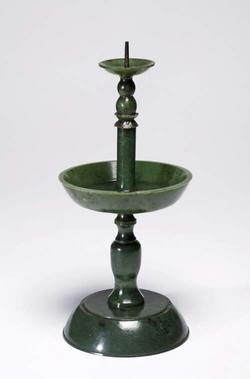 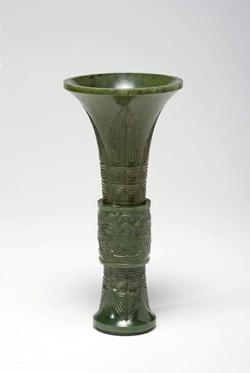 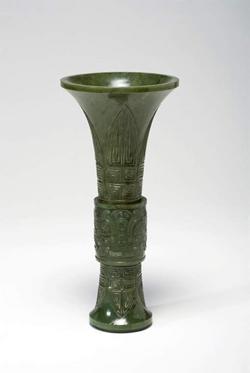