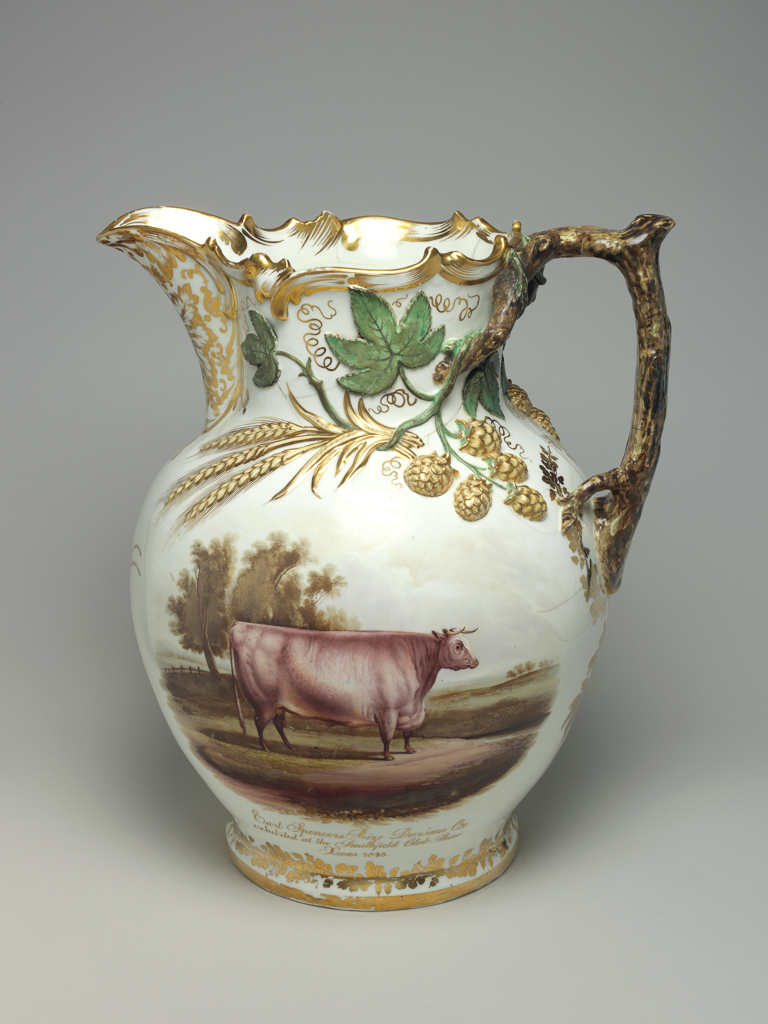 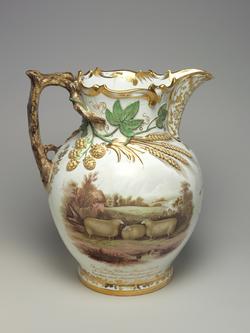 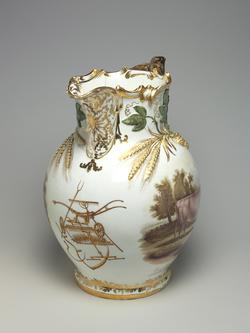 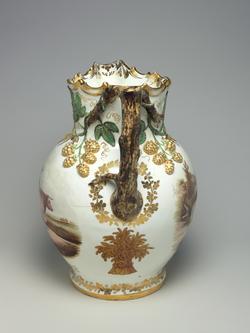 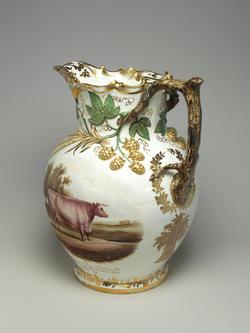 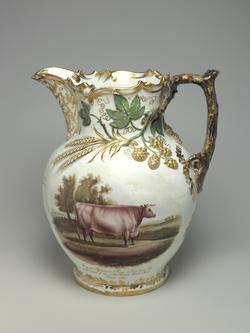 Soft-paste porcelain with feldspathic glaze, painted in enamels and gilded; on one side is a view of Mr Richard Hickson's three prize wethers in a landscape, and on the other, Earl Spencer's prize Durham Ox in a landscape, both with inscriptions below recording their successes in the Smithfield Club Show held at Christmas in 1837 and 1843 respectively

Soft-paste porcelain, moulded, with applied moulded relief decoration, moulded handle, and feldspathic glaze, painted overglaze in green, yellowish-green, yellow, yellowish-buff, pale brown, dark brown, purplish-brown, and grey enamels, and gilded. The outer edge of the base is unglazed. The bulbous body has a projecting base, a cylindrical neck with relief scrolls around the rim, an upward curving lip, and an angular branch handle which divides into two at the top and has a lateral twig on the left of the lower end. Both sides of the neck and shoulder are decorated with sprays of applied hops and barley extending from the upper ends of the handle towards the lip. One side of the body is painted with a view of a massive ox standing facing to the right in a landscape, with below in gold, 'Earl Spencers Prize Durham Ox/exhibited at the Smithfield Club Show/Xmas 1843'. On the other side there are three wethers (castrated male sheep), one facing front and two facing inwards on either side of it, standing in a landscape with below in gold 'Three Prize Wethers Bred & Fed by/Mr Richd. Hickson of Hougham near/Grantham which attained 4 first Prizes in 1837'. Below the lip there is a group of agricultural implements comprising a sickle, scythe, rake, pitchfork, plough and harrow ?, and below the handle, a stook of corn. The base and the lower end of the handle are encircled by wreaths of oak leaves and acorns, and there is a formal leaf design under the lip. The scrolls on the rim are gilded and there is a broad gold band round the edge of the base.

The Royal Smithfield Club, was founded as the Smithfield Cattle and Sheep Society in 1798 with Francis Russell, fifth Duke of Bedford (1765-1802) as President. Its first show was held in 1799 at Wootton's Livery Stables, Smithfield which continued to be its venue until 1862 when it moved to the Royal Agricultural Hall, Islington. Mr Hickson's prize for his three wethers was recorded in The British Farmers Magazine, vol. I (1837,p. 46) under ‘Smithfield Cattle Club Show’ , Class Nine, records that 'The premium of 20 sovereigns in this class, for long-woolled sheep, one year old, without restriction as to feeding, be adjudged to Mr Richard Hickson, of Hougham near Grantham, for his three 32 months old wethers, bred and fed by himself. Travelled in a cart 116 miles to the show.' and 'That a silver medal as the breeder of the above , be adjudged to Mr Hickson.' In 1843 Earl Spencer of Althorp's 4 years and 6 month's old Durham Ox won a first prize of £20 and a silver medal. The British Farmers Magazine (1843, NS vol. VII, p. 536) recorded that it had been fed on swedes, mangel wurzle, cabbages, hay, oil-cake and bean-meal.

The term 'feltspar porcelain' in the mark on the base of the jug refers to the lead-free glaze for which John Rose & Co. won a Society of Arts Gold Medal on 30 May 1820, rather than to the body of the ware, which was a soft-paste porcelain.

Inscription present: The first three words are written inside inside a wreath; Feltspar is in Gothic letters. The rest of the inscription encircles the wreath and the name of the firm is below. The o of Co is raised.

Inscription present: the r of Mr and d of Richard are raised